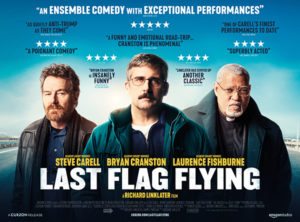 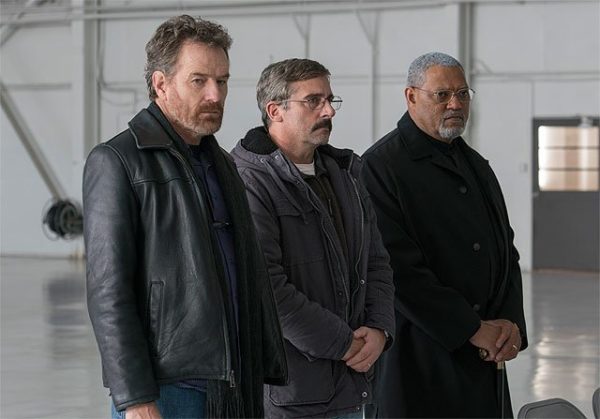 Richard Linklater finds the intimate amongst the grandiose. His films tackle glancing moments within sweeping vistas. Where Boyhood and the Before Trilogy – his two magnum opus’ – placed focus on the small conversations, the quiet moments that a decade later take on far larger meanings, his latest, Last Flag Flying, a spiritual sequel to Hal Ashby’s The Last Detail ruminates on memory and the fractious manner in which nostalgia is warped.

Steve Carrell (in a career best performance) is Larry “Doc” Shephard, who reunites with old Vietnam veterans Sal Nealon (Bryan Cranston) and Richard Mueller (Lawrence Fishburne) following the death of his son recently killed in Iraq. Doc hopes for them to help return his son’s body back home to New Hampshire for burial.

It’s a road trip movie first off, but a Linklater one at that. There are hijinks, just on a small-scale. Cranston’s Sal, now owner of a failing bar and occasional grill is now a jaded drunk, endlessly sarcastic and embittered by Bush’s decision to invade Iraq. Whilst Mueller, a recovering alcoholic, now resides over a church as chief minister, a career move that baffles Sal endlessly. 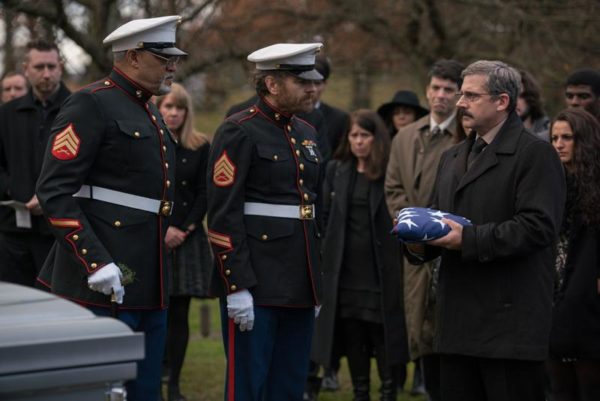 Where Fishburne and Cranston have roles rather broad, it’s on Carrell to ground the whole affair. His Doc, with whom thirty years earlier Mueller and Sal were to bring to an army prison facility and inadvertently resulted in the death of another solider following a weekend bender, is a broken, emotionally restrained father. His home life lays decimated following the death of his wife, the death of his son is only another stumbling block.

Linklater loves these reticent roles and Doc is one of his finest. It takes a while for him to crack seeing the body of his son could demand scenery chewing, but Linklater and Carrell pull focus away from Sal and onto the watching eyes of Mueller and Sal, who irreverently avert gaze.

It’s an innately political piece. It doesn’t declare anything widely, conforming to the anti-Bush, anti-war opinions so prevalent in 2003, but there’s an apt sadness to its prescience. Amidst the absurdity of post-Trump America, Last Flag Flying is a hushed political call for revolution. 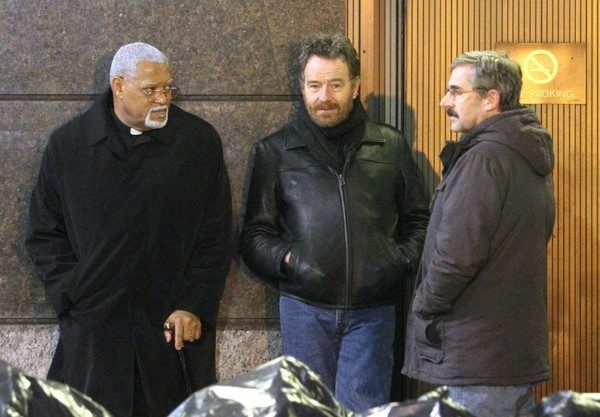 Nostalgia for a bygone time is a common theme amidst Linklater’s films and here he focuses on the melancholy of looking back. Mueller, Sal and Doc ruminate on memory, occasionally joyously – a detailed discussion of Sal’s experience with a hooker whilst in ‘Nam is a wonderful respite – but it’s little more than that. The death of a soldier thirty years earlier hangs heavy and forces them to visit his elderly mother. It’s a deeply moving moment and Linklater, as with everything previously, plays it with a deft touch.

Linklater is in the midst of a hot streak and Last Flag Flying is maybe one of his most quietly affecting, rousing features. It’s a political call to arms packaged and wrapped in nostalgia and Americana.