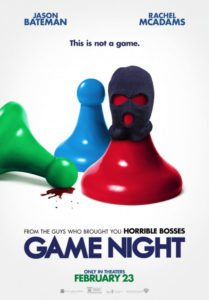 A group of friends who meet regularly for game nights finds themselves trying to solve a murder mystery. 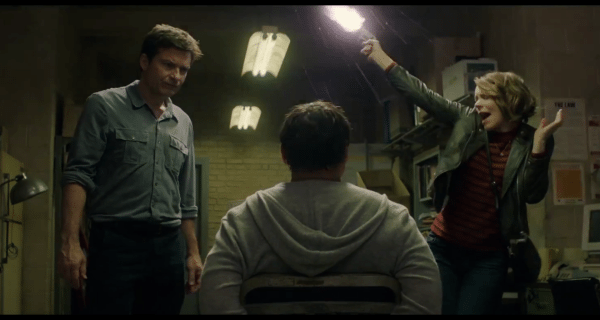 Game Night (written and directed by the apparently hit-or-miss duo John Francis Daley and Jonathan Goldstein, who are responsible for penning both the Vacation dud remake and a worthy MCU solo entry for Tom Holland’s incarnation of Spider-Man) never forgets its competitive board game roots, which might be the best thing about it alongside a hilarious ensemble putting in different comedic performances ranging from sardonic banter to dimwitted suggestions to slapstick shenanigans. As the evening unfolds and further unravels into dangerous madness, for better or worse, over-the-top chase spectacles and plot-twisting gunfights always find time for inappropriately timed Jenga competitions, risky moments of Charades in life or death scenarios, and a plethora of zingers intentionally utilized to maximize laughs from film aficionados. Not even Denzel Washington is a stone unturned (keep in mind, the humor pertaining to him is in no way malicious).

The story goes that one trivia night at your average run-of-the-mill bar, single romantics Max and Annie (Jason Bateman turning in the serviceable smart-ass work to be expected from him with Rachel McAdams really getting the opportunity to let loose and carelessly fire guns led to being believed that they are props while knocking possible kidnappers out with fire extinguishers) hit it off admiring each others’ bottomless pit of random knowledge; about a decade later they are still hooked on all types of partner games going as far as arranging weekly house parties to play with their small circle of companion couples. However, older brother Brooks (Kyle Chandler) is back in town, joining in on the antics, and upping the stakes by hiring a roleplay hostage service to grab a member of the group for hiding, all with the catch being that the pair that locates the missing pal will be rewarded the keys to one of his luxurious vehicles. 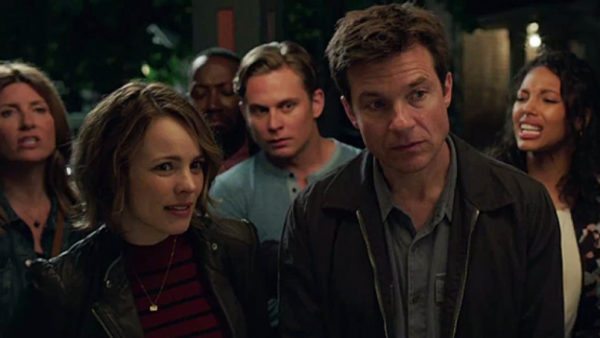 As if all of these distinct personalities weren’t competitive enough, it doesn’t help that Max and Brooks have a sibling rivalry dating all the way back to playing Battleship as little ones, and it’s a burning jealousy that has been carried all the way into adulthood. Max appears to crave the carefree lifestyle that Brooks leads which gets in the way of commitment to his own marriage, as according to a psychologist, heightened stress levels have basically rendered Max temporarily sterile, and it’s clearly a source of frustration in their relationship as Annie would like children while Max is content with their current life. Essentially, it’s a competent backbone to get us caring about the characters beyond surface value laughs, and it works thanks to Mark Perez’ script that inserts metaphorical passages related to Pac-Man and other notable classics.

Additionally, there are a whole host of wacky personas, and it’s safe to say that everyone will have their own particular highlight among the players whether it be Billy Magnussen’s doofus portrayal of Ryan linked with a new date in the form of intelligent British dame Sharon Horgan’s Sarah or Kevin and Michelle (Lamorne Morris and Kylie Bunbury) ironing out a marital woe that arises during a drunken round of Truth or Dare, but Jesse Plemons walks off with all the points stealing every single one of his scenes out from underneath everyone else in the frame as a divorced and lonely creepy police officer equipped with body language and deadpan line delivery that screams “there are body parts hacked up all over his basement floor”. Seriously, it’s time to stop labeling him as just a Matt Damon look-alike; he’s the best in show of Game Night and sidesplittingly treads the line between disturbed individual and lost in need of company other than the snow white Westie dog he carries around like they’re attached at the hip.

Game Night quickly becomes a film asking audiences “who is in on the role-playing and who isn’t”, but fortunately, for those familiar with similar movies and the tactics they employ to trick viewers, there are a few genuine surprises here. It just would have been preferred if Daley and Goldstein understood that ramping up situations to silly extremes is usually a detriment to the rest of the experience; grounded in reality humor mined from two idiots that know nothing about bullet hole wounds trying to extract one from the shoulder bring the laughs, while jumping the shark gets to be too much and instills hope that the film is reaching its climax. Game Night goes on roughly 20 minutes longer than necessary, but the overall point is that the pair of writers (and this was definitely a problem in Vacation) need to reign things back in before getting too crazy, even if their ideas aren’t technically bad or poorly directed. No matter what, the funniest bits are going to be whatever families can relate to most considering that, let’s face it, everyone has participated in board games that spiraled out of control into hotly contested wars around a coffee table.

Still, Game Night rises well above mediocrity thanks to its affection for beloved board games and excessive trivia sessions. The decision to base the majority of the trivia related questions around cinema is a logical way to appease to film lovers and general moviegoers alike. Also, even though during the final act it’s difficult not to mentally check out, there’s fun to be found in its slightly demented zaniness, all fitted with a dark and electronic score from Cliff Martinez (most famous for Drive yet here tackling and succeeding at black comedy for the first time). All things considered, Jesse Plemons is the winner; studios need to give him more work ASAP.