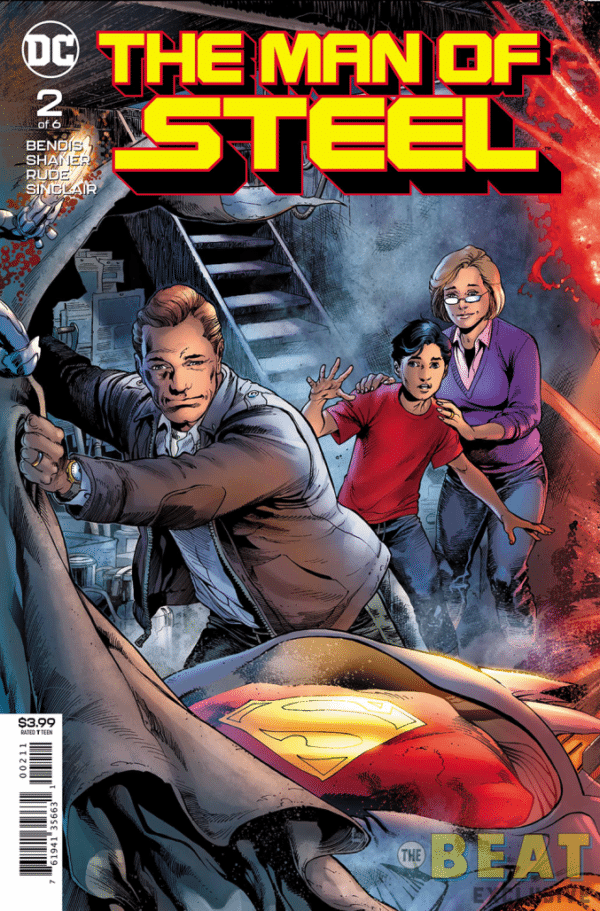 Brian Michael Bendis’ entry into the DC Universe continues with The Man of Steel #2, but whereas the first issue was a good introduction to Bendis’ Superman story, the second issue falters somewhat by being a bit slow and confusing. The direction the story is taking is not as clear as Bendis tries to build up a mystery over what happened to Lois and Jon, but the ambiguity of their absence doesn’t payoff.

Rather than picking up right where he left off, Bendis instead begins at some point after the events of the first issue. Its not stated how long exactly, but Lois and Jon have apparently been missing long enough that people are beginning to ask questions, yet Superman/Clark don’t seem too bothered by this. There’s clearly more to the story than we’re led to believe and it has affected Superman enough where he’s withdrawn from talking too much with his Justice League colleagues, but Bendis’ ambiguity in the matter doesn’t actually help build up the mystery. Rather, it somewhat stalls it by not placing any emphasis on what’s at stake or how it has affected Superman’s life beyond some gossip.

The best aspect about this issue, however, is the greater sense of Bendis’ handle on Superman’s supporting cast. We get to see Perry White, Jimmy Olsen and some new faces at the Daily Planet. The beats with White are interesting and plays into the relevancy of today’s media where everything has to be on a 24-hour news cycle. Stories cannot just sit, but constantly have to be in rotation and gain attention, clicks and airtime in order to survive. It’s an aspect that the Planet just can’t compete in with the old fashioned way and Bendis, through White, emphasizes the changing times very well. His deconstruction of their jobs should be interesting in this miniseries and Action Comics.

Bendis’ handling of Superman also hits the right notes. His characterization is both light yet serious, striking that nice balance as Superman fights Toyman and looks out for the little guy. However, it’s hard to tell exactly where his head is at since the story is so vague about Lois and Jon’s whereabouts coming off that cliffhanger and a rather confusing clue in this issue. It seems more like Superman is just going through the motions and trying to avoid any inner conflict, but its unclear exactly what it is or why he’s avoiding. The same thing can be said for the new villain Rogol Zaar, who only appears very briefly isn’t given any more depth than just a powerful force in the galaxy who fights for what he believes is right.

The art is good, though a little inconsistent. Doc Shaner illustrates the first half of the issue with Steve Rude doing the latter half with Jason Fabok transitioning between the two for a couple pages. They have similar styles, yet they’re inconsistent enough that it somewhat takes away from the issue, especially as Rude’s Superman looks a bit more out of the Golden Age of comics more than Shaner’s. There are also some confusing panels where its difficult to tell what’s going on or the imagery drastically changes with no context, making it even more unclear what Superman is going through. It kind of sums up the issue’s lack of context to what has changed and is going on.

The Man of Steel #2 isn’t a bad comic, but its lack of clarity lessens its impact. Bendis’ choice to place ambiguity above story progression doesn’t help the issue and makes it more difficult to tell what kind of story Bendis plans on telling. His handling of the characters is still well done for the most part, especially as he examines the relevance of Superman and his supporting characters in today’s world. However, this miniseries is going to need a bit more than suspense building in order to payoff.