The Pterosaur Hill DLC is now available for Snail Games’ ARK Park and places the focus on flight.  This free new DLC includes three new maps, a new mode of transport and the largest of the prehistoric flying creatures.  Pterosaur Hill is available on SteamVR, Windows MR and PSVR and will be released on Oculus and Viveport early July.  The new trailer below showcases the beautiful view from the game’s new transport… 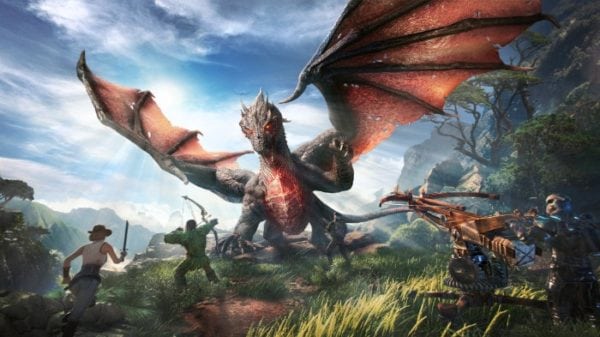 Pterosaur Hill introduces three new beautifully designed maps into the game, Mountain Lake, Crystal Sky Lift and Aviary.  As well as the maps, this update will give players a chance to get away from their land based vehicles and soar high in a hot air balloon, look down on the Mountain Lake, see the clouds of the Crystal Sky Lift and also watch the nest of the largest of the prehistoric flying creature, the Quetzalcoatlus, in the Aviary.

With ARK Park, players can:

The “Pterosaur Hill” DLC is built around the concept of flight. Three new maps are included: Mountain Lake, Crystal Sky Lift, and Aviary. In addition to using land-based vehicles, players will now get to: float in a hot air balloon overseeing Mountain Lake; ride the Crystal Sky lift, where they can soar through the clouds; and gaze upon the majestic nest of Quetzalcoatlus – the largest prehistoric flying creature – in the Aviary.