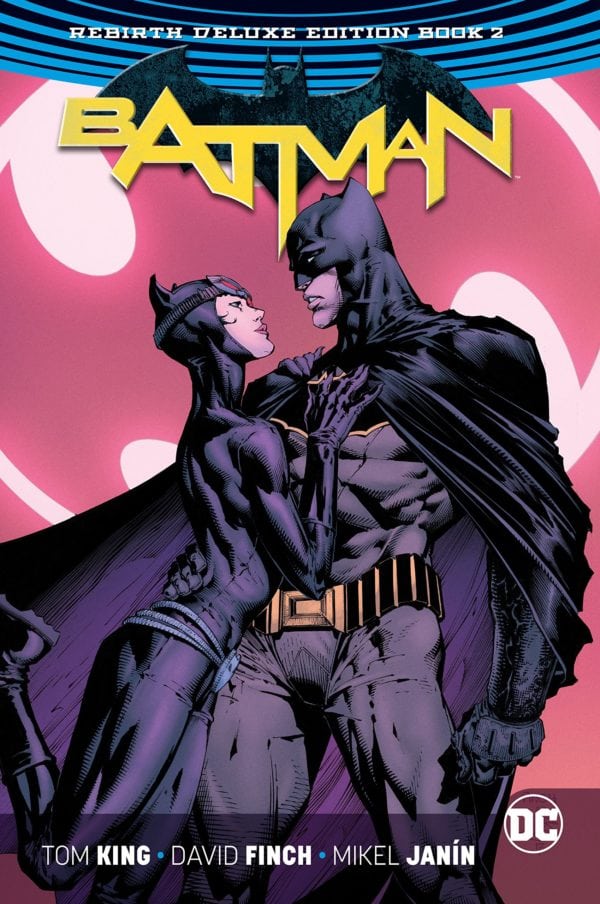 With Batman and Catwoman’s wedding upon us, DC has rather timely released the collection where their impending nuptials began in Batman: The Rebirth Deluxe Edition Book 2. The book is a nice, hefty collection of stories with Tom King delivering some pretty awesome Batman action as he first takes on Bane before flashing back to Batman’s early years in a pitched battle between Joker and Riddler. There is a lot to like in this book as King subverts expectations and delivers several surprises in his stories.

Beginning shortly after the first collection left off, Bane has come back to Gotham City to regain the Psycho Pirate in I Am Bane, doling out a heap of vengeance on Batman for humiliating him by attacking his family and allies. Bane is also back to sporting his classic look and dosing on venom with David Finch illustrating every vicious punch and kick from the supervillain. It’s definitely very well detailed from a visual standpoint as Finch shows every bruise, cut, scrape on Batman and Bane and the deteriorating state of their costumes throughout their prolonged conflict.

Most stories featuring Bane are hit or miss as the character has never quite reached the heights of his comic book introduction in Knightfall, often coming across more as an angry brute than an intellectual threat. King’s take on Bane is fairly nice as he explores both sides to the character, examining his fury while giving him some good pathos as he believes he did everything he could not to come back to Gotham and steer clear of Batman, but was forced to do so. It’s an interesting look at Bane’s state of mind and how he tried to conquer (most) of his inner demons until Batman re-took Psycho Pirate to undo what he did to Gotham Girl. ‘I Am Bane’ also does what few Bane stories have done since Knightfall by making him a true physical threat to Batman, reminding readers there’s still a good chance Bane can beat Batman again.

After that, the next big story in the collection is The War of Jokes and Riddles which sees Batman telling Catwoman all about an infamous gang war between The Clown Prince of Crime and Gotham’s most (alleged) brilliant genius. I already reviewed the story in full with the trade paperback and don’t have much new to add to it except that Mikel Janin’s art is even better to gloss over in the deluxe format. Every frown Joker makes or smirk Riddler throws are very detailed. Much like Scott Snyder’s Zero Year, this is a story that reaffirms Riddler’s villainy in Batman’s rogues gallery while also emphasizing how much of a threat Joker is when he’s not happy.

One of the big draws to the book is, of course, Batman’s proposal and subsequent engagement to Catwoman. It is en emotional and character driven issue as Batman is confronted with the possibility of actually trying to have a life outside of Batman. King deconstructs this in a lengthy conversation with Gotham Girl that also highlights how different Batman is from other heroes. Superman has Lois Lane, Green Arrow and Black Canary are together, Flash is with Iris, but Batman is all by himself. Its the beginning of the question to the second phase of his run of whether or not Batman is destined to be lonely.

Also included are the two Batman-centric stories of the Batman/The Flash crossover, The Button, where both heroes investigate a certain blood-stained smiley face button that has been one of the core mysteries of DC Rebirth and leading into the Doomsday Clock series. Though the book only collects the first and third chapters of that story, they can mostly be read on their own and have some great emotional moments between Batman and the Flashpoint version of his father, Thomas Wayne. It’s also this meeting that helps spur Batman’s decision to propose to Catwoman. There is also an issue where Batman teams up with Swamp Thing to solve a murder in Gotham and a collection of short stories set around Christmas from Batman Annual #1.

With some great art by David Finch and Mikel Janin, Tom King’s Batman stories are captivating and explore why Batman is such a memorable and awesome superhero. It helps that his stories aren’t just exciting action, but often character driven pieces that examine Batman’s world and the cost his enemies take on him. Batman: The Rebirth Deluxe Edition Book 2 is a great collection for Batman fans to dive into with some memorable moments and thought-provoking character work.