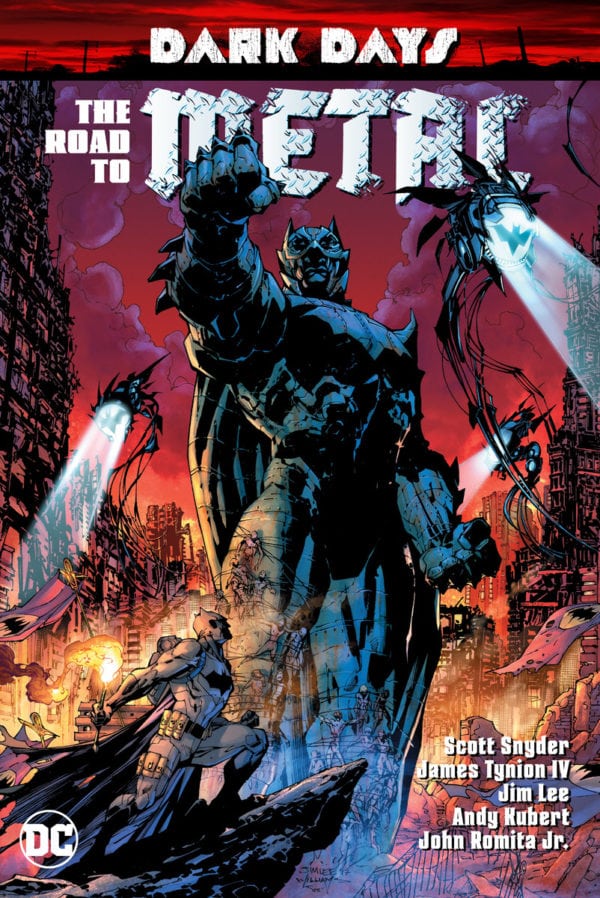 One of the big events of the DC Universe in the last year was Scott Snyder and Greg Capullo’s long awaited Dark Nights: Metal, an event that built off their New 52 Batman run. Before the beginning of that story, however, there were some other essential steps for readers to take before diving into the big story. Dark Days: The Road to Metal is a prelude to Snyder’s big story and not only includes some important tie-ins, but stories from past DC events that play a huge part in Metal.

The main part of the book includes the prelude one-shots Dark Days: The Forge and The Casting with Batman ramping up his investigation of the mysterious Nth metal and Dionesium, the latter of which played a large part of his final run of Batman. Against warnings from his teammates in the Justice League, Batman pursues this mystery as far as he can go while past investigations from Hawkman into this metal are brought to light, extending the depth of this upcoming threat.

Scott Snyder and co-writer James Tynion IV really pull together a lot of the threads from Snyder’s various stories, tying together much of his mythology into one epic narrative. Batman is shown to be just as driven to solve the mystery of the metal as he has been in Snyder’s past stories, barrelling along despite the danger that lies before him. It’s a character flaw that Snyder explores well in Batman, his belief that he always knows best. It’s interesting seeing the moves Batman makes as he prepares to dive further into whatever mystery his will open, but it’s just as interesting to see he’s making the same mistakes Hawkman has made.

The inclusion of Hawkman is a welcome one as he was previously absent from The New 52 and DC Rebirth thus far. Though he’s not in the story proper, only appearing in flashbacks and narration, Snyder’s handle on him is a good one that combines all of Hawkman’s various origins and emphasizes the hero’s detective side. In fact, Snyder’s handling of the other DC heroes, such as Mister Terrific, Wonder Woman and Green Lantern, is well presented as he captures the voice for each hero. Green Lantern in particular is given some good prominence as he heads into the Batcave and encounters Duke Thomas, the latest member of Batman’s extended team. Their chemistry is nice right off the bat (no pun intended) with some fun banter between them.

The story is densely packed with answers about what Batman has been looking into while raising the mystery with a multi-universal threat that even has the Guardians worried. The questions Snyder poses are good and the stories don’t really confuse readers, instead giving enough of a recap of Snyder’s story that they won’t be lost. Where some confusion might come in is from appearances from other DC heroes who don’t play much more of a role in these chapters, instead setting up further arcs in Metal or other series, such as Batman and The Signal No Justice and now Snyder’s Justice League.

It also has a variety of big DC artists attached to the story, namely Andy Kubert, Jim Lee and John Romita Jr. It goes without saying their art is well done and its great to see them drawing some of DC’s other heroes, though there are points where the art transitions to another artist within the same scene that can take a reader out due to the change in style. Kubert and Lee are close enough, but JRJR has such a distinct style that when scenes in the Fortress of Solitude or Batcave change from Lee to JRJR and back again within pages of each other, it offers a bit of a clash in visuals. Nevertheless, their art on their own is great as Batman interacts with various characters and Green Lantern and Duke meet an unlikely person in the bowels of the Batcave.

As well as collecting those issues, Dark Days: The Road to Metal also contains other significant stories from DC’s past, namely from Grant Morrison. Given how heavily Metal tied into Morrison’s epic Batman run, it’s no wonder this book would have so much Morrison material. Included here is Final Crisis # 6 – 7, the final two issues of that mega-event, and the introductory issue to The Return of Bruce Wayne. Those issues saw Batman hit by Darkseid’s Omega Sanction, getting sent way back to the past as the Omega Santcion took the form of a demon named Barbatos that hunted Bruce Wayne throughout history. These issues are fairly important to understanding the backstory of Metal and just how far this mystery Batman and Hawkman have been investigating stretches, though some readers may be a bit lost since the book contains the ending to Final Crisis, an event that is hard to fathom even reading all the way through, without even recapping the previous five issues and only the first chapter to Return of Bruce Wayne.

Also included is Nightwing #17 from Tim Seeley, a story which sees Nightwing and Robin teaming up once again to find Nightwing’s girlfriend and having to fight ‘copies’ of themselves. On the surface there isn’t much here to connect to Metal, but its moreso important for some of the tie-in issues of the even that see them leading a resistance. There is also a short story from James Tynion’s Detective Comics, seen in the Batman – Detective Comics: Rebirth Deluxe Edition Book 2, that expands on how Batman has been moving his allies around like chess pieces for something big. The inclusion of these stories is nice and helps sell how far-reaching Metal is, but some of the context may be lost on new readers who are jumping into these stories media-res.

Dark Days: The Road to Metal is a fairly solid prelude that explores the ramifications of Batman’s investigation while bringing in some classic and fan-favourite characters into the mix. Snyder and Tynion’s handling of the various characters and story threads are well balanced with some nice art from Lee, Kubert and JRJR. The transition to different artists could have been handled a bit better and the inclusion of other stories that Metal builds off of is good to have, though risks alienating readers who have no context as to why they’re important. Dark Days still emphasizes the greater nature of Metal, though, and the danger the DC Universe finds itself in.