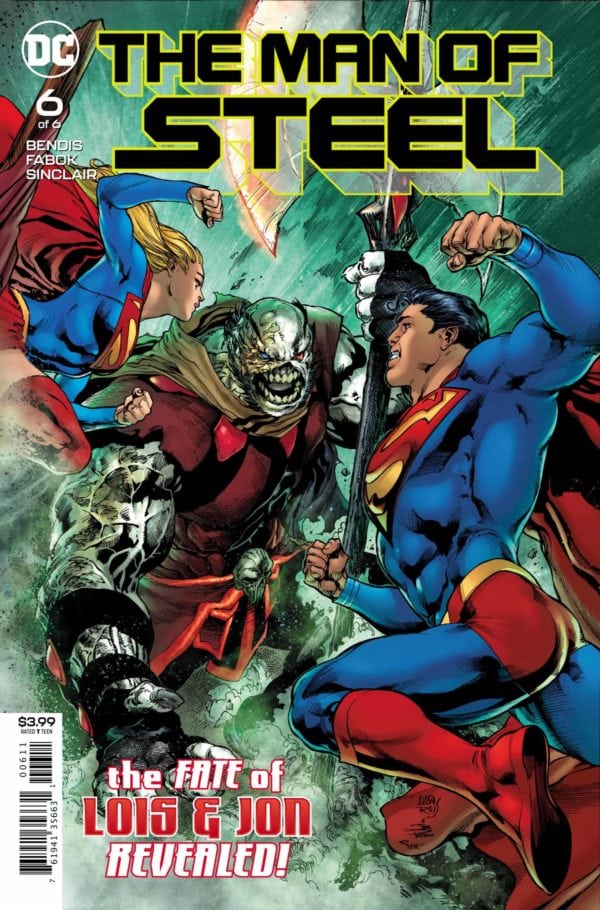 Since this miniseries started, The Man of Steel has been on a bit of a bumpy ride with goo and so-so issues in its short run. Brian Michael Bendis brings it home in its final issue and actually delivers an ending that make up for a couple problems in previous issues. The Man of Steel #6 is a good conclusion and sets up some interesting things for Bendis’ story, and the Superman franchise, going forward.

What Bendis succeeds at the most is the extended flashback to the Kent family as he finally reveals what happened to Lois and Jon. This actually clears up one of my criticisms from the previous issue as I felt Jon and even Lois to an extent were acting out of character, but Bendis gave some fairly solid reasons as to why Jon would want to go wit Jor-El around the universe. He makes it much more than Jon being rebellious or wanting to get to know his grandfather, but connects it back in a surprising way to the Superman, Super Sons and Teen Titans crossover ‘The Super Sons of Tomorrow’. It’s some nice character work and Bendis writes Jon well as he worries over a potential future where he inadvertently kills millions.

Another strong aspect was Lois as she finally got a big part to play other than “What is that?” or “He can’t go.” She gets some nice moments comforting Jon and Clark and has a solid reason for leaving aside from just looking after Jon, showing some of her classic stubborn characteristics as she was determined to look out for her son. Bendis also made two clever moves with Lois with one being her cover story of travelling the galaxy for her book deal (one which only a select few know of, explaining why no one else knows at the Planet knows this) and Clark giving Lois his Superman suit. It was a nice touch to explain why Superman is no longer donning the costume from the beginning of Rebirth and gone back to the red trunks and it’s also an intriguing thought if Lois will be making use of that suit in a super way when she returns.

It is a bit unfortunate, though, that Bendis has done away with the Kent family for now. The return of Clark and Lois’ marriage with the addition of Jon was one of the highlights of DC Rebirth and made the Superman title often soar above the others. As we’ve seen in this miniseries, the lack of that family dynamic hurt the story as there was just something missing in Superman’s interactions. Perhaps that is the point, so readers could feel Superman’s loneliness themselves and why Lois and Jon are so special, but it still made the overall story weaker.

What was also weak about the story, and this issue in particular, was once again Rogol Zarr. Six issues later and he is no more personable than he was in the first issue as his hate for Kryptonians is no intense he doesn’t believe for a second in Superman’s heroic image, believing he has duped Earth. The one good thing about his interactions with Superman was how the Man of Steel was able to make him angry and take charge of the fight. The fights in the miniseries have been consistently good and with Jason Fabok at the helm of the art, it was one of the series’ best looking fights.

Bendis has also done well with his use of Supergirl, both in the dramatic moments and fight sequences, and here was no exception as she came in and saved the day, though at the cost of a temporary solution to their problem. It’s still interesting, though, how this also sets up the new Supergirl series later this summer. While Bendis most likely isn’t done with Zarr yet, I do wish we had gotten to learn more of him aside from being a skilled warrior who hates Krypton.

As said, Fabok’s art was a highlight of the issue. His quiet moments with the Kent family and the battle against Zarr all look great. He nails the character’s emotions and his facial features are quite detailed. He also does well with the movement in and between panels, such as how Clark bends down to Jon’s level, Clark and Lois sharing a glance or Jon running to his room in the background. Brad Anderson’s colours also give the issue a vibrant look that compliments Fabok’s pencils very well, making the images pop off the page.

The Man of Steel #6 managed to stick the landing and salvaged the series for me after a couple lackluster issues. Not all my criticisms were addressed, but Bendis does some good and intriguing character work that make the future of his series very interesting. The only thing missing is that family dynamic, but hopefully Bendis will bring Lois and Jon back sooner than later.