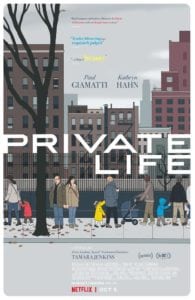 An author (Hahn) is undergoing multiple fertility therapies to get pregnant, putting her relationship with her husband (Giamatti) on edge. 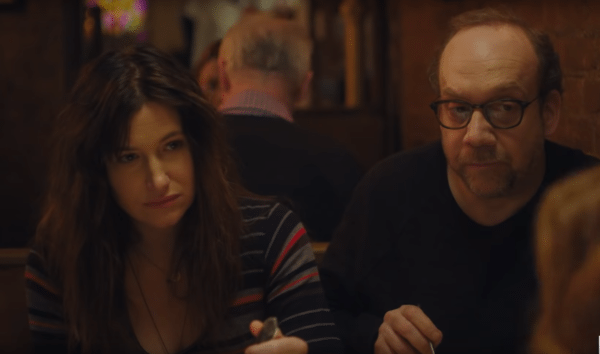 I’m not an expert on any of the highly scientific and very real fertility alternatives on display in Tamara Jenkins’ Private Life (an Oscar-nominated filmmaker also responsible for writing one of the better films of 2018, Juliet, Naked) but she is well-versed, as the film is semi-autobiographical to great lengths. Paul Giamatti and Kathryn Hahn brilliantly play the central married 40s couple, both artists but desperate to conceive a child at this point in their lives; the challenges they go through are both mentally and physically exhausting, which is something that these two outstanding performances exemplify. They don’t even need to say a word to let us know that years and years of these treatments have strained their love, but when they do it hurts just a little bit more watching them try and try yet still come up short.

In lesser screenwriting (Tamara Jenkins also wrote the script but her husband is an uncredited yet extremely valuable asset on-hand), many of the situations these characters are placed in would ring hollow, as if a filmmaker wants to punish their creations solely for the sake of tried-and-true emotional manipulation. Private Life does have scenes that somewhat fit this bill, but the difference is the authenticity in the presentation, whether it be an emotional scam artist conning a surrogate pregnancy for attention or doctors berating women on the inner workings of their bodies seemingly thinking without speaking (sadly, an all too common practice within the industry) or the fractured marriage itself that appears to be hanging together on one thread; having a baby. 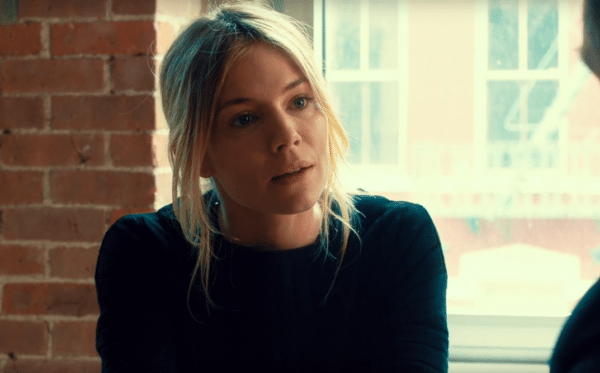 There’s a saying that having a child is the solution to all relationship woes, so the interesting thing about Private Life is that, from what we are told, this was once a happy couple and a successful one at that with Richard (Paul Giamatti) and Rachel (Kathryn Hahn) achieving notoriety as respected artists (theater director and writer, respectively). Problems didn’t arise until tackling this dream, and part of the film deals with them attempting to own up to responsibility for waiting and pursuing other passionate projects. For those wondering, adoption also seems to be out of the question as they are deemed unqualified due to the graphic sexual paintings proudly displayed over the walls of their home, and they also probably just would prefer other options due to the uncomfortable nature of the entire endeavor. As Richard says at one point though, nothing about the couple’s road to pregnancy has been natural and things likely won’t ever start.

This is when Richard’s niece Sadie (a revelatory turn from Kayli Carter) enters the picture as a college dropout uncertain of her direction in life despite carrying strong intelligence, an artistic mind, and all-around ambition. Not blood-related in any way, the pair politely and reasonably asks Sadie to lend her eggs for a procedure that will allow Rachel to carry the baby herself, also with Richard’s sperm. It’s also here were Private Life morphs into a full-on portrait of familial commitment, love, sacrifices (Sadie’s disapproving mother played by Molly Shannon has drilled into her daughter limitations of what a woman can achieve, possibly as a byproduct of her own perceived shortcomings in life), all of it rendered beautifully real.

This shift in the plot does come relatively halfway through the film, so I don’t want to say too much, but as Sadie begins to take on intimate and personal responsibilities, it also becomes clear that she is the one saving this marriage, and not just because she is paving the way for the gift of life. Richard and Rachel are so drained and empty from these tedious and never-ending frustrations that they can’t even find the time to celebrate their anniversary or have sex. However, Sadie sets up a nice romantic dinner for the two all prepared for when they return home from their duties (which I can only assume is repeated doctor visits). With that said, everything she’s willing to give up for the sake of people she loves absolutely tugs at the heart-strings.

Now, Private Life isn’t all weepy dialogue, as it’s actually very clever at finding humor in the relentless uncontrollable failures of fertility staging. And while the lovebirds here bicker, it too carries authenticity. Private Life also refuses to go where you might expect even when the narrative teases certain things, although it probably does take longer than necessary to set up the meat of the narrative. Rest assured, this will be a difficult but painfully accurate watch for anyone that can deeply relate. However, the ending doesn’t matter, as the journey with these characters is all too engrossing thanks to their indomitable spirits. There might be some cracks in the relationship, and by extension, the family at large once even more parties decide to assist in invasive ways, but love shines within these conflicts. 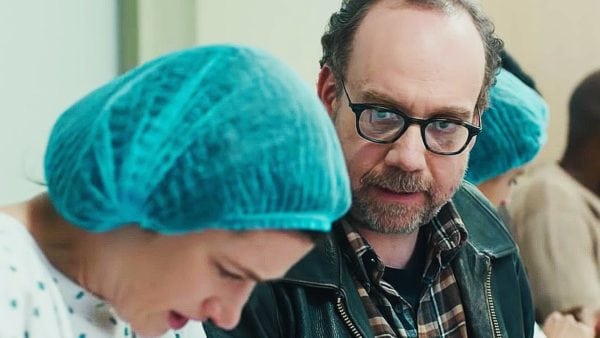 Paul Giamatti makes this look easy (he’s no stranger to playing characters that find humor amid tragedy) but Kathryn Hahn is even better; there are traces of her more recent outspoken characters but she is largely restrained here, expressing every emotion imaginable. Anytime we hear positive news regarding a new procedure, her joy is palpable, and we are just as ready to cry right there with her whenever an unfortunate turn of events rains on the parade. Make Private Life public viewing with the whole family.