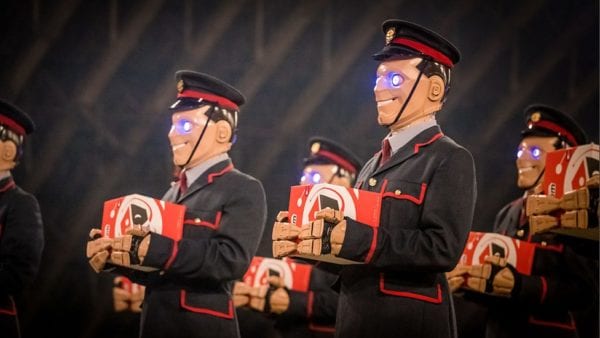 Have you ever wondered what the world would look like if Jeff Bezos put all of his earnings on a winning horse one day?  If those giant warehouses of Amazon, Hermes and Buy’N’Large finally exceed the land they’re built upon and had to expand on a planetary scale, what would they look like?  And more interestingly what would their workforce consist of? Well in this week’s episode of Doctor Who we get to find out.

After the Doctor (Jodie Whittaker) takes a late delivery of a Fez, though in fairness to Kerblam Man Delivery-Droid they were lucky it never arrived at the Fourth Doctor’s TARDIS door (or did it?), it’s discovered – within the delivery box – someone or something has left a “Help Me” message for the Time Lord and her Companions to find.  With this need for assistance dispatched across the galaxy, the TARDIS is manoeuvred to the moon of Kandoka, the home of Kerblam!. 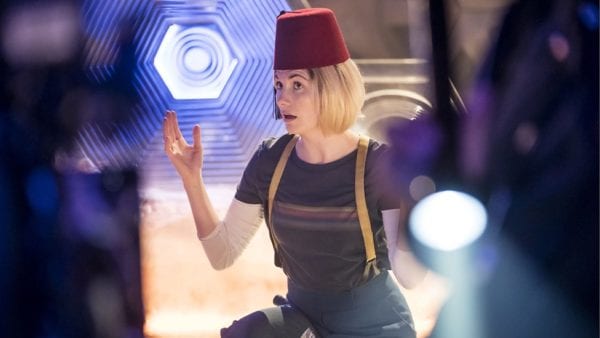 With a clever use of Psychic Paper and the Sonic Screwdriver, the Doctor manages to distract Kerblam’s “Head of People” Judy Maddox (Julie Hesmondhalgh) and all four member of the TARDIS become full-time, organic-employees of the Kerblam workforce, which is currently at 10,000 strong and one of those many thousands may have sent the “Help me” message.

With the Doctor and Yaz gently probing current employee’s on the morale of the workforce, it doesn’t take long before this mega-complex begins to show signs of wrongdoing.  With disappearing organics, Delivery Droids in the wrong zone, and power disruptions causing black-outs clearly something isn’t right in the galaxy’s favourite distribution warehouse. 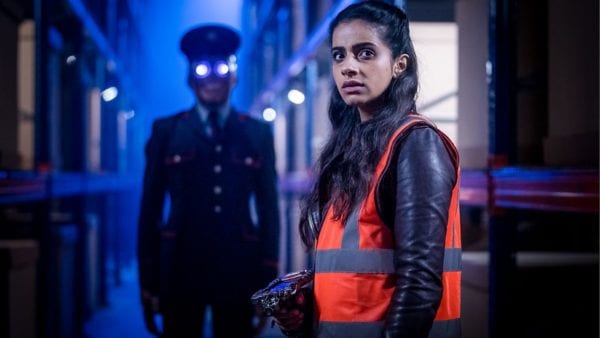 Well this was a fun episode, though it has to be said it was not without its flaws.  The flaws being (before I turn to what I clearly enjoyed) the Delivery Droids – for reasons unknown – liquefying random employees, but it not being revealed to the wider-workforce.  Surely if the idea of this is to make technology seem like the “bad ‘un” you’d want this slaughter to be public and not hidden away in an area nobody can ever visit?  If the “System” can channel everything into throttling our real menace, why couldn’t it stop the Delivery Droids from picking up the aforementioned randoms? Lastly… bubble-wrap being the weapon! Not accounting for the random newbie starting on the processing line pressing a bubble, there’s over 10,000 people in that building!  I’m positive that there must be a least one seasoned wrapper that snaps one or two bubbles on those tension sheets throughout the day. 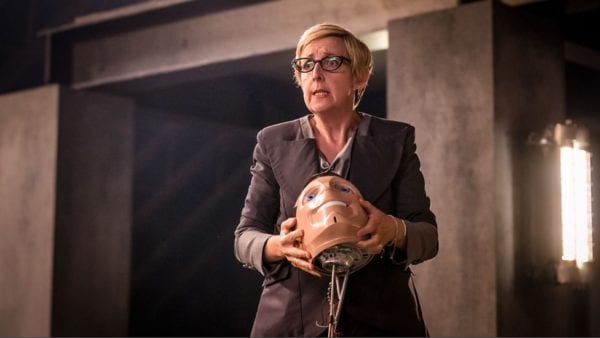 Now the negative chat is out of the way, it has to be said that I did like the episode.  It was an enjoyable stand-alone affair that didn’t look to character building, but concentrated on bringing in a faux monster of the week, only to pull that rug from under our feet come the close.  The Kerblam-Men also reminded a lot of the Johnny-Cabs from Total Recall, which is also a great memory to kick back up from the back of the mind, so that design certainly won praise from myself. Also Jodie Whittaker’s Doctor is really brilliant in this episode, not only at being the Doctor, but with her small quirks which if you blink or look away from the screen you will most certainly miss them.

One thing I really did appreciate was Jennifer Perrott’s love of Stanley Kubrick.  The lobby scene when the Doctor and Companions initially arrive sung of The Shining hotel lobby scene when the Torrances are walking across the lobby.  We even have the caretaker polishing the glass display case. Later on we even have low-shots of symmetry, especially in Jarva Slade’s (Callum Dixon) office, which also looked fantastic within this episode.  Hopefully we’ll see more direction from Jennifer Perrott in the future.

SEE ALSO: Trailer for Doctor Who Series 11 Episode 8 – ‘The Witchfinders’

Kerblam! was a very enjoyable, self-contained episode.  Yes it had a cluster of flaws, but if you can look past those you’ve got some great Doctor Who here.