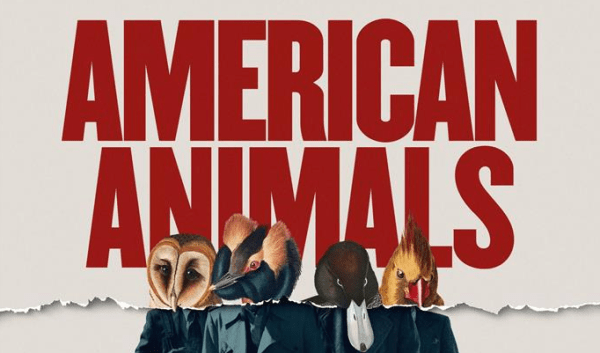 Occupying a fascinating middle ground between documentary and – for lack of a better term – ‘’traditional cinema’’, American Animals was one of 2018’s most idiosyncratic movies. And also one of its best.  For context, the film chronicles a botched heist from 2003, in which four Middle American university students- Spencer Reinhard, Warren Lipka,  Eric Borsuk and Chas Allen- attempted to steal the rarest books from their school library, all for the express purpose of injecting a little excitement into their lives. Indeed, rather than being driven by financial gain or necessity, the movie posits that they were really just striving for a sense of worth and meaning in life, as if they were pursuing a twisted version of the American dream.

However because the details are so jumbled, with conflicting accounts and shaky recollections, it was a very hard to set the story straight. To counterbalance this, the innovative docudrama seamlessly blends together scripted recreations of alleged events, with authentic interview segments featuring the real perpetrators (dubbed ‘’the book thieves’’ by the media). It’s a truly captivating experience, bolstered by stylistic flourishes, 4th wall breaking moments and a surprising amount of depth.

In advance of the film’s home release, we were lucky enough to catch up with BAFTA winning director Bart Layton (The Imposter), who is fast proving himself to be one of the most distinctive voices in the documentary field. Here, we chat about his radical for vision for the movie, some of his boldest decisions and the experience of meeting the real guys. 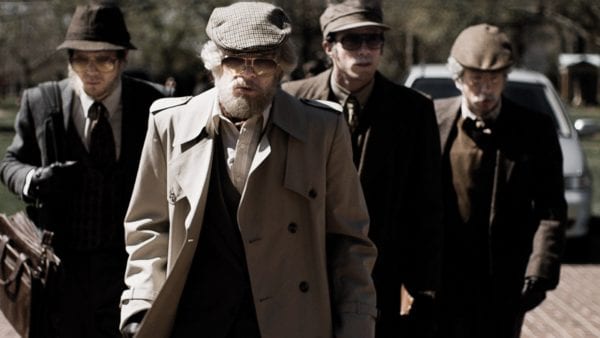 Thank you for doing this. I didn’t want to take up too much of our time fanboying, but this was my favourite film of 2018.

Mate that’s great to hear! It’s always good to start with that stuff. I’m thrilled that you loved it!

One of the things I really admired about the movie was how it cleverly defied my expectations. Because I went in expecting something that was a bit more akin to a black comedy or a caper, but it’s actually a lot more poignant and and empathetic than that. Could you talk a little about where that approach came from?

Well I’m glad you felt that because – for me – that was what made it a story worth telling. Rather than it just being a good caper or, as you said, a comedy of errors. The more I got to know the real guys, it felt increasingly like a very contemporary story about these young men who were pretty lost. [They] had been brought up on an expectation that they were going to be interesting, that their lives were going to be of value, and that they were going to be special in some way. But then they realised, as most of us do, that that probably wasn’t going to be how it played out.

There’s something of that deep disappointment and increasingly we live in a culture where being average isn’t really acceptable. It’s become synonymous with being a nobody or being a loser and so that was my reason for wanting to tell the story. I wanted to make a film [exploring] this need to be a ‘’somebody’’ and to leave a mark on the world, even if it’s not necessarily a good one.

But it’s also a really entertaining thriller at same time.

Right, because the other thing that was very much baked into the script is that [the book thieves] get lost in this fantasy. And some of that is quite fun and weird, meaning that the audience can enjoy it as well!

At first they were just naive, feckless and arguably a bit idiotic, but not really criminals. Yet then an invisible line gets crossed and so that was when it was going to take quite a significant turn into a different kind of a movie. One where we are all brought crashing into the consequences and reality [of the situation]. When I spoke to the guys in prison I got the very distinct impression that, from almost the millisecond that they crossed that line, they regretted it deeply and wished that they could undo it. So I suppose that’s really where the kind of moral of the story comes from. 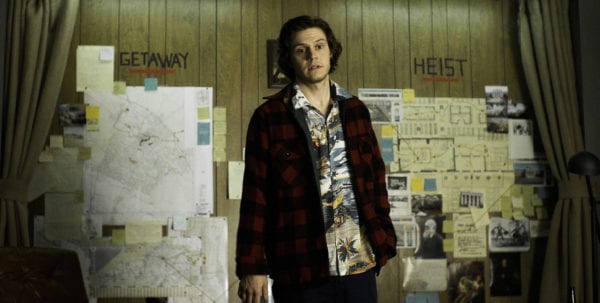 You just mentioned the correspondence that you had with the real guys in prison and I was wondering how that came about. I mean, how did you instigate that contact with them in the first place?

Well my background is in documentary and that’s the way that we operate in that field. You know, there is a real person to draw from. And I often think that in fiction films, or what the Americans call ‘’Narrative movies’’,  there’s a real resistance to that. People will buy the rights to an article or a book and I guess, on some level, they’re terrified of speaking to the real people involved, in case the story becomes more complicated or nuanced. Or at least, that it will become less neat in structural terms. And so that’s partly why they depart so wildly from the truth in cases like, I dunno, Foxcatcher or BlacKkKlansman. Often the myth is way better than the truth.

But with this film my feeling was that, the closer we stick to the truth, the more you will feel connected to both the story and the characters. You’re not in movie world, you’re not suspending disbelief and that’s what we do in documentaries. We go straight to the horse’s mouth and as close to the source as we possibly can.

So to answer how [the correspondence] came about, I’ve worked with a young producer called Poppy Dixon for a long time, she was my producer on The Imposter. And yeah, we just wrote to the guys in prison and then she went down to meet with them while they were there. You can get a day visit and we just started the relationship that way. After that, we began a correspondence where we would write to them and just ask for more and more detail and that was the thing that, for me, turned it from a heist movie into something more resonant.

And during these conversations, did something stand out to you about Spencer specifically? Something that made him more relatable, or more suited to being the protagonist?

There definitely was. I debated for a while, who should be the audience proxy and who should be our way into the story. Obviously Warren was going to be way too out-there. We all know someone like Warren, but most of us are not [like that]. Then I thought about Eric, but he came into the story quite late.

Spencer was just the most relatable. He was quite shy, introspective and obviously he was swept along with this thing. You know, he talks very early on in his letters about his dreams of becoming an artist. He researched all the great figures and found that they were all united by this common thread, which was that they had all suffered. That they’d all had slightly tragic experiences in earlier life.

So there he is looking at his perfect life and thinking: ‘’What story am I ever going to have to tell?’’  That felt like a really honest and privileged idea, one that a lot of people can probably relate to. Even though you have to be pretty privileged to start worrying about the fact that you haven’t got enough trauma in your life.

It did feel weirdly relatable and I could completely identify with how he was feeling.

And now we’re in this culture where we all walk around with these devices and apps that give you a metric for how interesting you are. So you find yourself comparing your Twitter, or your Instagram to one of your peers and that inadvertently becomes your way of judging yourself and your importance. It actually has less to do with the quality of what you’re doing and more to do with the viewing figures or whatever.

And that felt like a really great place to start: a protagonist whose central problem is that he doesn’t have enough of a problem!