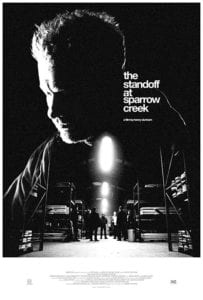 A former cop-turned-militia man investigates a shooting at a police funeral.

Two different suspects confess to committing a domestic act of terror that they didn’t actually carry out. It’s a testament to how well the debut feature-length film from writer and director Henry Dunham (who only has one credited short making up for his entire filmmaking career thus far, a highly notable observation considering the quality of the craftsmanship on display here), The Standoff at Sparrow Creek, draws its characters with more psychological depth than the rather routine alibis of each individual might let on.

Drawing inspiration from topical events, a quiet opening segment places audiences inside the isolated home of former cop turned militiaman Gannon (James Badge Dale, turning out to be the best in show of a narrative that escalates tension from tightly scripted, one-on-one interrogations) overhearing gunshots and explosions off in the distance, subsequently being radioed into the tragic occurrence and called into the nearby armory the militiamen operate from. Essentially, a public shooter is on the loose targeting the funeral site of a police officer, ramping up bad blood between the two factions (with more hell threatening to break out as the night goes on) but once everyone collectively arrives at the armory it becomes evidently clear that one of their own is responsible for this senseless violence. For various reasons, Gannon is placed in charge of uncovering the culprit behind the crime, all of whom have fairly solid alibis during the quick window of the violence.

Probably the best aspect of The Standoff at Sparrow Creek is one that works for most films from this particular distributor (for those unaware, RLJE Films is responsible for releasing Bone Tomahawk, Brawl in Cellblock 99 and Mandy) is that it explores sensitive subject material (here we have a mass shooting serving as the central event springing the plot into motion, handled respectfully) and embraces familiar genre trappings without resorting to a level of grandiose violence that undermines everything these characters have to say. And trust me, these are some mentally unsound individuals serving as vessels for a host of relevant discussions, typically filtered through the aforementioned interrogations that crackle with intensity. 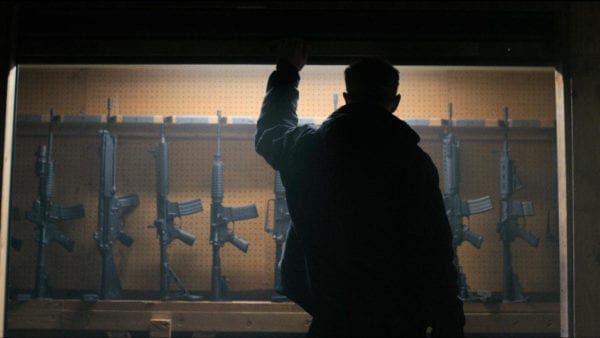 Naturally, as Gannon begins to break down and crack his first suspect, our film watching instincts tell us that something more is going on; a confession likely means nothing if it’s coming 25 minutes in. However, it’s disturbingly eye-opening into the tragic incidents that could potentially drive people into committing violent acts. There’s never a moment where you don’t believe any one of the major suspects are incapable of pulling off something so heinous, and for as much as I would like to credit this believability to the performances of the actors (they are serviceable at best), it’s the script that is truly illuminating. Especially so considering that Gannon is just as reclusive and introverted as the ones he is interrogating. With that said, there is a subplot where another member of the militia is important to him, leading to a development that feels a little too far-fetched for a gripping thriller so otherwise grounded in reality, and the inevitably explained reasoning for Gannon switching sides to the militia, so to speak, feels rushed in flashback form.

It also has to be stated that as the revelations pile up, The Standoff at Sparrow Creek oddly becomes somewhat confusing, by extension, stripping away some of the character depth on display. Even if the ending is suspenseful and catches the viewer off guard, that doesn’t mean it’s not a little bit silly and overcooked. There’s a sequence where Gannon is exchanging monologues and playing mental games back and forth with an unhinged sociopath that nearly shot up his own high school (including a short burst of brutality superbly framed from afar), and it’s here where the film peaks in intensity before diving into one final leg that can’t quite match up to this tension.

It’s no surprise that The Standoff at Sparrow Creek is already garnering comparisons to the work of Quentin Tarantino, specifically Reservoir Dogs; they both contain a wide array of characters with one of them hiding something, are set in small locations, and waste little time racing to the finish line factoring in that both clock in around 90 minutes. Of course, the dialogue never reaches the heights of a Quentin Tarantino film, but very few movies could ever do that. It’s not a bad thing to be compared to Quentin Tarantino at all, but Henry Dunham rarely seems to be actively attempting to ape that legendary filmmakers most distinguishable traits, and is more interested in the real world commentary of his film even if it doesn’t actually seem like he knows what he wants the film to say. Keeping that in mind, you can’t really go wrong checking The Standoff at Sparrow Creek out; it’s intense and occasionally disturbingly enlightening to some terrifying mindsets, and if nothing else, a blast to witness unfold.