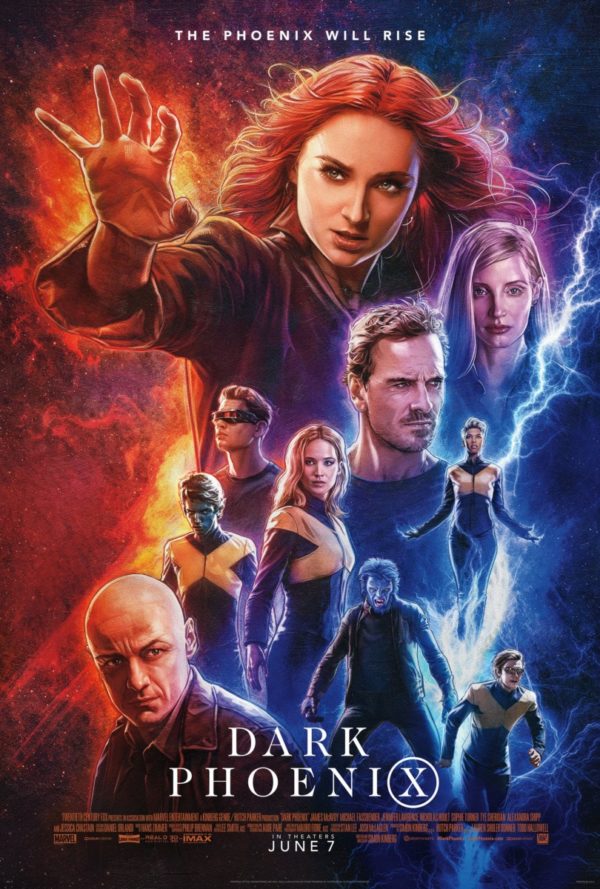 Jean Grey begins to develop incredible powers that corrupt and turn her into a Dark Phoenix. Now the X-Men will have to decide if the life of a team member is worth more than all the people living in the world.

Not since the release of Justice League has a major superhero tentpole had as tough a time making it to the big screen as Dark Phoenix.

First and foremost, Bryan Singer’s public disgraces required a changing of the directorial guard prior to shooting (with long-time writer-producer Simon Kinberg filling in), and the film’s release was delayed significantly to allow the majority of the third act to be re-shot (reportedly due to excess similarities to Captain Marvel‘s finale).

That’s to say nothing of the Disney/Fox merger being finalised mid-production, re-charting the film’s course as the “ending” to the mainline X-Men series. And with pre-release marketing being met with ridicule by many fans, rumours swirled that Disney was only releasing it in cinemas out of obligation to Fox.

Dark Phoenix takes a second pass at the much-loved Dark Phoenix Saga comic run, as so disappointingly translated to the screen by Brett Ratner in 2006’s X-Men: The Last Stand. But given that Kinberg was also responsible for co-writing – and co-botching – that movie, re-hiring him for another go-around here seems ill-advised at best.

And because Kinberg simply writing the film wasn’t dubious enough, he was also given $200 million to direct Dark Phoenix himself, in his feature filmmaking debut no less. In that stead, it’s hard to feel bad for Fox that this movie is such an utter waste of the many great talents and resources involved with it.

Leaping forward another nine years to 1983 – and consequently stretching the characters’ ageing plausibility past breaking point – the film begins with the X-Men now a well-oiled unit. However, when a mission to rescue the space shuttle Endeavour goes horribly wrong, Jean Grey (Sophie Turner) absorbs the full force of what appears to be a solar flare, enhancing her psychic abilities to dangerous levels in the process.

Turning one of the X-Men’s own into a ticking time bomb is a fine enough premise, yet it’s not one Kinberg does anything remotely interesting with, to the extent that this is somehow less basically compelling and emotionally engaging than even The Last Stand itself.

The central plot, to stop Jean from being seduced to the dark side by alien shape-shifter Vuk (Jessica Chastain), feels rushed and clumsy, unaided by an over-abundance of wonky, limp subplots, including a feckless delve into Jean’s past, various melodramas among the X-Men and, yes, Magneto (Michael Fassbender) once again ending up at odds with the heroes.

Moreover, Kinberg’s dialogue is almost exclusively of the auto-complete variety, lacking any and all sense of creativity or personality, while smacking distressingly of what you’d expect if a studio algorithm were trained to trawl blockbusters circa 2002 for “cool” dialogue.

But the spectacle rocks, right? Not quite. Almost every single scene in this film, action or otherwise, suffers from Kinberg’s oppressively dull, flat direction. On one hand there’s the overly frantic space rescue set-piece and the choppily edited mutant super-brawl in New York, and on the other we have dialogues unspooled with an utterly unfussed sense of efficiency.

The film’s final action sequence very nearly raises the pulse with a few effective beats for several of the sidelined heroes such as Beast (Nicholas Hoult) and Storm (Alexandra Shipp), but ultimately nothing feels like it matters, regardless of what the characters are telling us. Hans Zimmer tries to make the images exciting with his punchy musical score, but even his surging synth work can only do so much.

This all conspires to squander an illustrious cast the film absolutely doesn’t deserve. Jennifer Lawrence’s tenure as Mystique has always felt like a bit of a damp squib, but she’s never seemed this blatantly uninterested in the material, while shamelessly mailing her part in from several continents away. And while Jessica Chastain would seemingly serve as a major credit to just about anything she’s cast in, she’s unable to do much at all with her soggy cardboard cutout of an antagonist, who the film honestly doesn’t really need.

Elsewhere Michael Fassbender doesn’t seem much fussed about reprising the Magneto role, showing up surprisingly late into the film and doing little to build on anything he’s brought to the table before. And then there’s poor Evan Peters, who gets benched fairly early on, presumably to resolve how obviously over-powered his Quicksilver is.

The only actor who really makes much of a lasting impression is James McAvoy, once again bringing the dignified humanity to Charles Xavier audiences expect, with the added twist of some moral ambiguity not present in many of the prior films. McAvoy never feels like he’s making lazy acting choices in even his worst scenes, and he’s to be commended for trying to keep the flagging enterprise afloat.

More surprising in her competence is Sophie Turner, who seems not to be the lost cause many assumed her to be on the basis of her downright terrible performance as Jean Grey in X-Men: Apocalypse. Turner’s still a rough-around-the-edges actress unable to elevate the witless writing, but she’s making the requisite effort, and her American accent sounds decidedly tidier than last time.

Still, Dark Phoenix‘s many systemic failures and missed opportunities add up to a film that never really needed to exist, and feels like a desperate attempt to milk the property’s teat once more before everything fully defaults over to Disney. At least it’s all over now, and at least this entry’s only 114 minutes long (in contrast to Apocalypse‘s brutal 144 minutes).

Fox’s X-Men franchise wraps up with a regrettably listless, mechanical finale that feels neither essential nor satisfying.