Fans of Overcooked 2 need to get their chef’s hat back on as Team17 and Ghost Town Games announce the release of the new ‘The Night of the Hangry Horde‘ DLC.  This latest DLC brings new kitchens, new cooks and new recipes.  Also released is the free Sea Chef Pack DLC which features 5 new chefs.  See more in the trailer below… 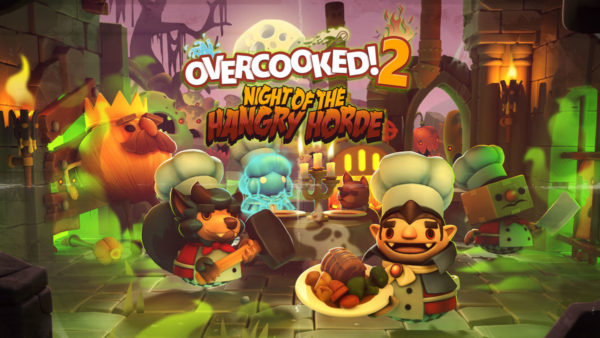 With this latest premium DLC, the Onion Kingdom is once again under attack but this time by the hordes of the undead.  Players will need to serve up a variety of dishes to satiate the hunger of this new threat.  These new recipes include guillotine chopped soup, fruit pies and roast dinners, the latter can be cooked quicker by adding more coal to the furnace.

Players will get four new chefs, including Ghost, Vampire and Werewolf plus Boxhead, and nine creepy new kitchens and three new hidden Kevin Kitchens for them to work through.

Eight all new horde mode wave levels will see players feed the enemies to stop them attacking the castle.  Chefs will gain the ability to repair the castle and unlock shortcut gates using earned coins and fight against different enemy types such as the ‘unbread’, ‘zombie chilli pepper’ and ‘zombie apple’.

The free All at Sea Chef Pack brings a new team of chefs including pirate chefs, mermaid chef, narwhale chef or shark chef.