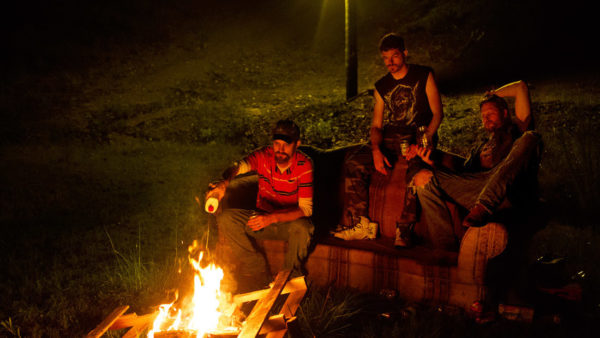 Two friends scramble to hide the truth from their families and the authorities after a raucous night together leads to the hospitalisation of their fellow band member, Dick Long.

Zeke and Earl clumsily carry a limp body towards the entrance to a hospital, cursing and desperately reassuring themselves and each other. Daniel Scheinert’s second film after impressive debut Swiss Army Man (co-directed by Daniel Kwan) trades fantasy for homegrown American crime, albeit the accidental kind. It all started with a harmless band practice shared between three friends; drunk and loud but somewhat tame nonetheless. “Wanna get weird?” one of them says, holding up a bag of drugs and ruining the already strained sense of composure. From this introduction, it probably isn’t clear just how weird things are going to get.

A delightful skewer of small town US life, Scheinert’s film takes aim at the relaxed nature of setting. Rattling them out of a stupor, the film illustrates, amongst other things: townspeople collectively horrified at the news that a man has been kidnapped and murdered, police without leads or an identity of the victim, and two mates who think their friend is just going to sleep it off and be fine. The script deliciously stretches out the truth, revealing drop by drop the simultaneously shocking and absurdly comical facts of the previous night. So much hilarity is mined from watching the protagonists try to cover for themselves – in Zeke’s panicked giveaways and Earl’s persistently vaping façade of calm. Both Michael Abbott Jr and Andre Holland perform excellently, to the extent that it would be hard to picture them playing any other roles than these, in this very situation. Sarah Baker too, shines as the eager police detective on her first murder case, brilliantly paying tribute to the driven nicety of Marge Gunderson.

Other comparisons to Fargo are inevitable and justified, but Dick Long makes just as many nods to noughties man-child stoner comedy as it does to the Coen brothers’ work. There is impressive logic in writer Billy Chew’s sequencing of the events, presenting Zeke and Earl as everymen rather than ever condemning them as criminals. As Zeke digs himself a deeper and deeper hole through his actions and lies, the thread unravels exactly how it should – there is never a need for exaggeration. Chew trusts in the power of the reality here, and rightly so. This sentiment is complimented by Scheinert’s down to earth but tongue in cheek direction: Dick Long retains Swiss Army Man’s empathy and most of its heart, but puts it to use highlighting the stupidity and ludicrousness of situation – totally aware of the fact that the characters remain surprisingly loveable throughout.

Dick Long is a fantastic example of great up and coming filmmakers with free range to indulge and explore. And what comes from that is a magnificent tale – filled with as much revelry as emotion – of very little consequence for anyone. This is the masterstroke, an explosive chapter in the lives of some fascinating people, closed without fanfare. As the two struggle through a verse of Nickelback’s “How You Remind Me”, the film once again plays up these the adorable haplessness of these characters. After all, if they learnt their lesson, who comes away worse from this whole palaver? Except Dick Long of course.