Mobile games developer DeNA has announced that pre-registration for Attack on Titan TACTICS is now available on Google Play in the US, Canada and Australia.  This free to play real-time strategy game based on the popular anime series will have players defending their base from the onslaught of Titans.  A new trailer celebrating the game’s pre-registration can be seen below… 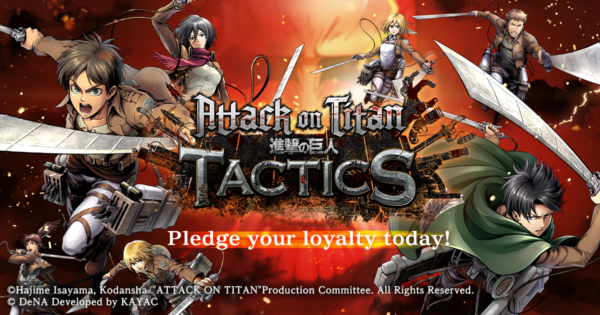 With Attack on Titan TACTICS players will have the opportunity to create and deploy their own scout regiment and protect their base from being devoured by the Titans. The game’s story mode will follow the story from the first season of the anime but also feature new and original stories and scenarios that aren’t in the anime or manga. Other game modes include Chapter Episodes which provides original stories, and Events, offering limited time content.

There will more than forty different characters included with each having different roles, leader skills, abilities and special skills, these characters include fan favourites Eren Jaeger, Mikasa Akermann and Captain Levi, all voiced by the anime’s voice actors.

To celebrate the opening of pre-registration, the developers will reward players that pre-register with an in-game reward of 300 Crystals if the total number of pre-registered players reaches 70,000.