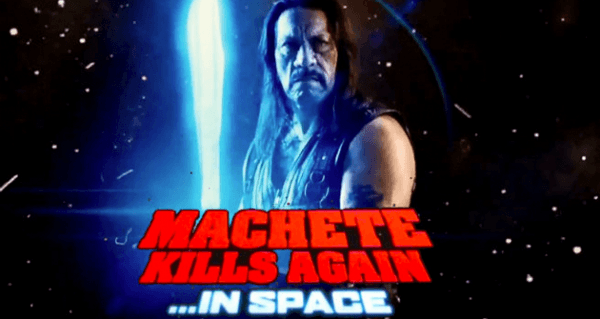 Despite being promised the movie during a ‘Coming Attractions’ trailer attached to 2013’s Machete Kills, it’s been a good while since we’ve heard anything about Machete Kills Again… In Space, the planned third movie in Robert Rodriguez’s Grindhouse spinoff series.

However, speaking to Syfy, actor Danny Trejo has revealed that Machete Kills Again… In Space has found itself “all bogged down in bullshit”, but he’s still hoping it becomes a reality, and is even considering getting behind the camera to direct it himself.

“Everybody in the world wants that,” said Trejo when asked about its status. “I keep telling Robert, and you know, it’s all bogged down in bullshit, so I might do it. I might just produce it and do it, if he don’t get off his buns! Everybody wants this, I mean, everybody in the world. I’ve been asked that all over the world. “Hey, are you going to do Machete in Space?”

“It was the biggest thing in the world for a while,” he continued. “I mean, you got endless movies doing number six, number seven, number eight. And Machete had a great story to it, you know what I mean? I might try to figure out how to do that myself. If I could do a movie, I would direct Machete. I mean, it would just be so much fun I would add a director, but I’d be in it, you know what I mean? I’ve just got some great ideas for it.”

Would you like to see Trejo’s Machete back on the big screen to kill again… in space? Let us know your thoughts in the comments or on our social channels @flickeringmyth…