Playstation Plus subscribers will be able to spend December fighting huge multiplayer battles in towering titans and immerse themselves in two-wheeled racing action thanks to Decembers free PS+ games, Titanfall 2 and Monster Energy Supercross – The Official Videogame. 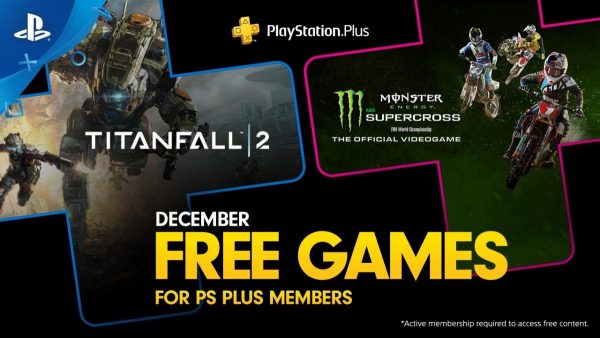 In Titanfall 2 players can take on others in fast-paced tactical multiplayer modes or immerse themselves in a single player campaign that follows the story of Jack Cooper, a Frontier Militia rifleman that has been stranded behind enemy lines.  As Jack, players will bond with his recently deceased mentor’s Titan BT-7274, and embark on a mission to stop the Interstellar Manufacturing Corporation from launching a devastating superweapon.

Monster Energy Supercross – The Official Videogame urges players to don their crash helmets for an intense riding experience through the Monster Energy Supercross Season.  There’s official riders from 250SX and 450SX to choose from, and there’s over 80 official brands and 300 items available that will allow the customisation of both bike and rider.

Players can test their skills in the game’s career mode or prove to their friends they are the best in the multiplayer modes, and if that’s not enough, create the dream stadium using the game’s Track Editor.  Created tracks can be shared online with others online plus there’s a wealth of unique tracks from other players to try out.

Titanfall 2 and Monster Energy Supercross – The Official Videogame will be available to Playstation Plus subscribers from 3rd December.