The Flickering Myth writing team share their thoughts on the first trailer for James Bond’s next outing, No Time To Die… Between director changes, delays, accidents, on-set rewrites and rumours of crew discontent, Daniel Craig’s fifth and final outing as 007 certainly hasn’t had the smoothest of rides (you might even say its production has been shaken, not stirred…), but with less than four months to go until its release, yesterday brought us the very first trailer for the hotly-anticipated No Time To Die. Here’s what our writers made of this first look at Bond’s 25th official big screen outing…

Shaun Munro – Jury’s still out on Rami Malek’s villain, but this is definitely a promising first look. Cary Fukunaga’s work on the film looks great, and it’s nice to see that Lea Seydoux *seems* to survive the pre-titles sequence. Some of the pithy, self-aware dialogue is most likely indicative of Phoebe Waller-Bridge’s involvement; Nomi seems like a great addition, and I’m hoping the film scales back the convoluted storytelling in favour of something leaner, wrapped around the usual ridiculous action. I was pretty down on the film from all the troubled production reports, but this is encouraging. 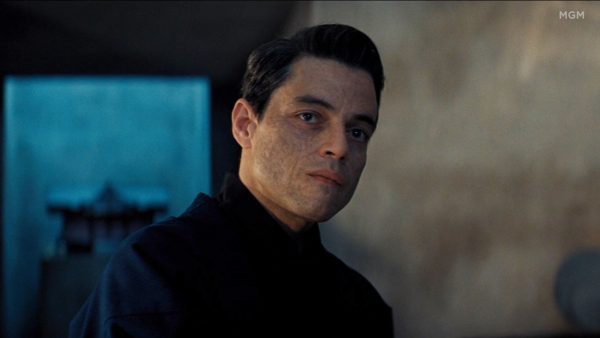 Alec Frazier –  I am absolutely enraptured and enthralled by this. I have been a Bond fan all my life. With the 50th anniversary some years behind, the Bond franchise is a world record holder for the longest running film franchise. They are certainly pulling out zero stops for this film. I am very glad to see Christoph Waltz and Ben Whishaw return for this, the epic finale of Daniel Craig’s bond. In real life, special agents are forced into retirement by age 52, so this has been a wonderful, fulfilling, productive run for Craig. I have my own suspicions about Rami Malek’s character, and, if true, it will be absolutely glorious. Craig will be retiring from the role, but make no mistake about it: “James Bond will return.”

Ricky Church –  I’ve been a big fan of Daniel Craig’s Bond since his tenure began. Apart from Timothy Dalton, Craig is perhaps the closest to Ian Fleming’s creation of Bond than the other actors who have portrayed him. Seeing him close out will be bittersweet, but this excites me for No Time to Die. Even with the production troubles I’ve been looking forward to this and Cary Fukunaga looks to have crafted an intriguing finale for Craig. It looks to continue the deeper character study of Bond that began in Skyfall (and has run through Craig’s run really) with some entertaining action pieces. I’m glad to see Lea Seydoux back and seems to play another big part in the plot and Ana de Armas and Lashana Lynch look great too. It’s also nice to see Waltz’s Blofeld return and Rami Malek looks interesting as the new villain, if perhaps a bit derivative as another dark mirror to Bond as Silva, Blofeld and several other villains have been in the past. I am excited by the film’s trailer and the potential Craig’s final go looks to have. Allen Christian – I’m upset that it looks good. I was bracing for this being a complete mess, as most final films are for Bond actors. Now I have expectations. Glad they went ahead and confirmed Waltz back as Blofeld. Malek’s character still doesn’t have a name. Given the setting and the way he looks, I’m going to align with the Dr. No theory. All in all, I’m more excited than I want to be.

EJ Moreno –  I’m not a Bond person, so my opinion doesn’t carry much weight. But it looks like a typical Bond movie, which is what fans want. There’s cars, guns, and beautiful people doing cool things. What sold me was Lashana Lynch, and whatever is going on with her character. Give me more of that in the final product, and I’d be a happy camper.

Helen Murdoch – Looked like a standard Bond movie that gives away too much in the trailer. Got a feeling I know what “the Secret” is already. Not sure on Malek’s villain yet but keen to see what he does. The most exciting part of the trailer was Lashana Lynch, hopefully she can bring something fresh and exciting to this one as Craig looks a bit knackered. Laura Jorden –  Let’s face it, Bond is a sub genre in itself after all these decades so a Bond trailer has to have all the essential elements including, sweeping vistas, cool cars and gadgets, James in brooding mode pre to kicking ass, stunning Bond girls, oodles of witty one liners and of course that theme. This trailer rightly has all of those along with some tantalising narrative bread crumbs thanks to a few familiar faces.

Malek as the resident bad guy is certainly intriguing and since it’s Daniel’s finale, seems like they are pulling out all the stops to make sure his last mission goes off with a stylish bang. The cast look impressive plus sprinkling the considerable talents of Phoebe Waller-Bridge into this mix should ensure some smart ass to soulful dialogue. It’s certainly one I’ll be in the cinema for, since we all know, “nobody does it better”

SEE ALSO: Ana de Armas on playing a new kind of Bond Girl in No Time To Die Tom Beasley  – It looks like a Bond film, and that’s enough for me. I love this franchise and it looks like they’re making some subtle and welcome changes to the formula with the badass addition of Lashana Lynch. The villain is still facially scarred for some reason but hey, baby steps for this particular fanbase.

The action looks slick and exciting, with Craig still very much looking the part. He certainly looks streets ahead of where Roger Moore was in his later movies. I’m not crazy about all of the absurd connections between characters, but the jury is out on how well that will work. Overall, this Bond fan is very happy.