Netmarble Corp has announced that pre-registration for their upcoming mobile RTS Magic: ManaStrike is now available on Google Play and the App Store.  As the first Wizards of the Coast game made by developer Netmarble Monster, those who pre-register will receive a whole host of in-game prizes, including in-game and premium currency and more, once the game launches and they complete the tutorial.  Watch the new video below where representatives from Netmarble and Wizards of the Coast discuss the development process, art, key features and more. 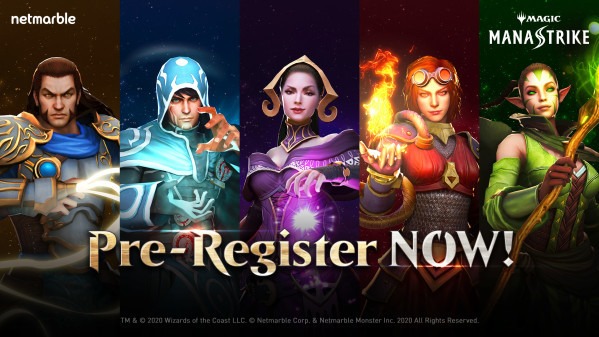 Magic: ManaStrike is an RTS combat game set in a parallel universe created by Magic: The Gathering’s most powerful villain Nicol Bolas.  After losing the war with the Planeswalkers, Nicol Bolas has set up this universe to find their weaknesses and is contracting players to provide combat data by controlling Planeswalkers and units.

Players will take part in intense PvP matches and will be able to collect new cards, enhance their units as they progress, and experience a vast universe of original spells from Magic: The Gathering.

Pre-register now for Magic: ManaStrike on Google Play and the App Store and enjoy a multitude of rewards when the game launches later this year.