For the past few months I’ve tried to say something positive about Xbox Games with Gold although most months I’m also feeling a tad disappointed at the majority of games on offer.  Sadly this month is also one that makes me feel quite disappointed, but on the bright side the games are free and I haven’t had to pay anything extra.  The new announcement trailer for GwG (see below) has over 11.5k dislikes compared to 3k likes and going by the comments there is not much approval from the Xbox fan-base. 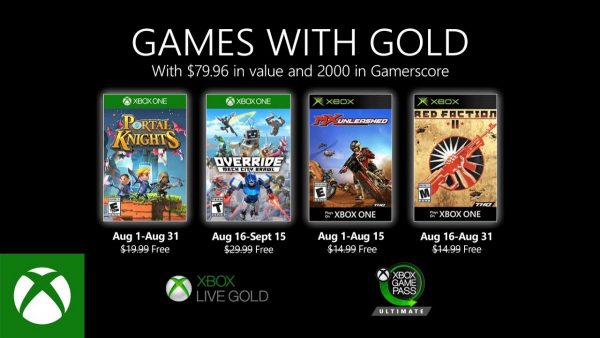 Throughout August Xbox One players will get access to Portal Knights.  This is a co-op, 3D sandbox action RPG that has players take the role of a Warrior, Mage or Ranger and explore dozens of randomly-generated islands by traveling through mysterious portals. Players will be able to craft plenty of items and unlock private islands where they can build their own castle.

There’s lot’s of enemies to defeat, each of which has their own unique strengths and weaknesses, and vanquish the most vicious and dangerous “boss” creatures, the Greatbeasts.

For the second half of August is Override Mech City Brawl.  Control gigantic robots and battle it out across epic cityscapes in this 3D mech-based brawler.  Lay waste to cities as you fight it out with opponents and see the likes of cities and countries like Tokyo, Egypt, San Francisco and Mexico get crushed underfoot.  Players can even join up to 3 friends and each take control of a different part to a mega sized mech.

Up until 15th August is the original Xbox title MX Unleashed, a 2004 racing video game developed by Rainbow Studios and August’s free games ends with Red Faction II.  Travel to the 22nd Century and take on Sopot, the corrupt dictator, who has oppressed the people of the Commonwealth.

What are your opinions of the Games with Gold recently? Are you loving the games, or far from satisfied? Let us know on Twitter @FMyth_Gaming…