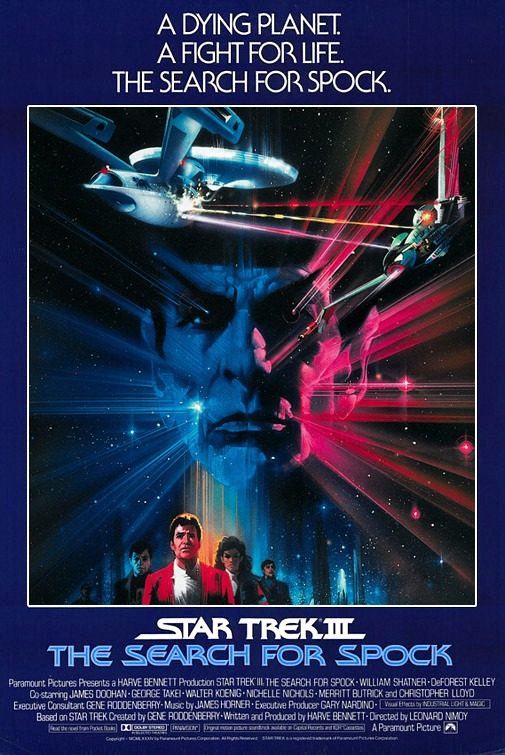 No Trek movie was placed in a more unenviable position than Star Trek III: The Search for Spock, tasked with following up Nicholas Meyer’s The Wrath of Khan in not only finding a villain to match its predecessor’s, but returning Spock to the fold in a somewhat organic manner.

So the decision to have Leonard Nimoy direct the movie himself, in his filmmaking debut no less, was a bold and compelling one. And though it’s a passing shame that Trek didn’t commit fully to Spock’s demise, in the very least Meyer was smart to sew the seeds of Spock’s revival into the previous film’s iconic “remember” moment.

The third Trek movie is packed with its fair share of silliness, yet Nimoy’s impressively sturdy filmmaking is a firm ballast; the potential goofiness of Bones playing “host” to Spock and all the katra nonsense works more often than it doesn’t, save perhaps for that slightly-too-silly scene in the bar, and Child Spock suffering through the worst case of puberty in recorded history.

Yet even in its dafter moments, The Search for Spock’s leanness keeps it on the right side of amiable, clocking in at a svelte 105 minutes, and that’s including an opening “Previously on Star Trek” catch-up gambit.

For a threequel this is a lot less showy than what came before both visually – bar the gorgeous Enterprise explosion sequence – and in terms of pure atmosphere. Nimoy’s decision to have so much of the film unfold sans-music is distractingly odd, yet it also gives many of the superbly-penned dialogues plenty of room to breathe – particularly a wonderful exchange between Kirk and Spock’s father Sarek (Mark Lenard).

Kirk’s own family dynamic sadly doesn’t land quite so strongly; the sudden death of his son David (Merritt Butrick) doesn’t earn the pathos it clearly craves because their bond was so scarcely established, and simply, we as audiences hardly knew him. 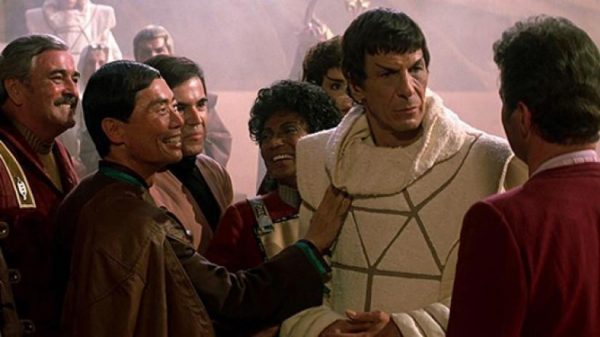 Nimoy is also noticeably less comfortable in the action stakes than Meyer, especially where ground-based combat is concerned, resulting in the panto-worthy demise of the otherwise menacing Klingon baddie Kruge (Christopher Lloyd).

But its inconsistencies can be forgiven enough thanks to the work of a strong ensemble, once again; Shatner’s interactions with Bones-as-Spock and Scotty are just delightful, while Sulu (George Takei) and Uhura get a little more to do this time around. A pre-Back to the Future Christopher Lloyd is fantastic as Kruge, making for a compelling if slightly underwritten villain with a simple yet solid motive – wanting to preserve his race while getting out from under the Federation’s boot. Also be sure to keep your eyes peeled for a cameo from the late, great Miguel Ferrer as the Excelsior’s First Officer and Helmsman.

There’s no mistaking the disappointment of Lieutenant Saavik’s recasting from Kirstie Alley to Robin Curtis, though; Curtis’ stiffness feels inconsistent with Alley’s previous performance, and overall she does very little to make her iteration memorable or even basically interesting.

But at the end of the day, we circle back to Spock, whose revival was the film’s risky proposition to fans. Sensibly, the screenplay does make the quest to resurrect Spock an arduous feat rather than a quick walking-back of the prior emotional payoff. After a surprisingly strong first act, the film emerges on shakier ground dramatically and technically, but absolutely works when it trains its focus on broader emotional beats over supernatural gibberish. The simplicity of Spock’s “Your name is…Jim” is really quite perfect, no matter what you make of the pic overall.

An uneven and at times quite ridiculous follow-up to The Wrath of Khan, but still worthwhile thanks to solid performances and great character work.