Ricky Church reviews the fifth episode of The Mandalorian season 2…

After months of speculation and rumour, The Mandalorian finally went there with ‘The Jedi’ by bringing the fan-favourite Star Wars: The Clone Wars character Ahsoka Tano to live-action. Directed by Dave Filoni, who ran the shows Star Wars: The Clone Wars and Rebels and helped create Ashoka with George Lucas, ‘The Jedi’ was a fairly entertaining if somewhat uneven episode as Mando learnt more about Jedi culture and Grogu’s past – yes, The Child has a name now. It felt a bit less successful bringing Ahsoka to live action due to Rosario Dawson’s performance and the way she was written, but her presence raised a lot of interesting possibilities for both The Mandalorian and future Star Wars content going forward. 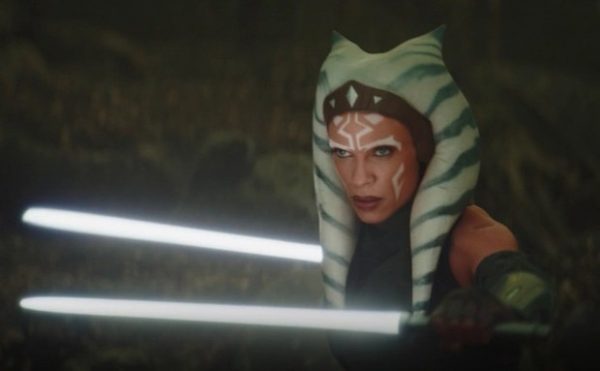 Right from the beginning, Filoni wasted no time bringing Ahsoka into play with a pretty cool and exciting introduction as Ahsoka effortlessly took down a bunch of hired goons led by a town’s ruthless ex-Imperial Magistrate, played by stuntwoman and Bruce Lee’s goddaughter Diana Lee Inosanto. The use of the environment throughout the sequence, from Ahsoka using the mist and trees to sneak up on her enemies, made for some pretty great visuals. Viewers who would have been unfamiliar with Ahsoka prior to this moment would have immediately gotten a sense of her as a skilled, powerful and dangerous Jedi. It also showed how fair the character typically is as she gave the Magistrate a time frame to surrender rather than just go for a straight attack against the rest of her forces and also presented the stakes as the Magistrate vowed to torture the village’s townspeople if Ahsoka didn’t leave.

That is, however, where some of the episode’s issues with Ahsoka’s depiction arose. Ahsoka didn’t seem overly concerned about the villagers, seemingly more concerned with the information she was after than with their safety. She did inquire to Mando about their well-being, but it still seemed like a bit of an afterthought. Another aspect which didn’t quite ring true to the character was Ahsoka’s view on personal attachments for Jedi. While she did grow up believing personal attachments created a risk for Jedi, as many other Jedi like Yoda and Obi-Wan Kenobi believed, one would think that her experiences toward the end of The Clone Wars and in Rebels would have taught her otherwise. Then again, though, she may still believe attachments are a step toward the Dark Side since she directly referenced how they led to the fall of Anakin Skywalker into Darth Vader. It still seemed odd though and created a disconnect in her characterization. Dawson’s performance didn’t help much either as she didn’t feel quite right as Ahsoka. Some of her mannerisms were familiar and there were bits of dialogue that were in line with Ahsoka’s personality, but overall Dawson didn’t quite capture Ahsoka’s spirit. It might have to do with the fact this is the first time in 12 years anyone but Ahsoka’s voice actress Ashley Eckstein has played her that it felt odd, but just because Dawson looked very much like a live-action Ahsoka does not mean she was a good fit for the character. 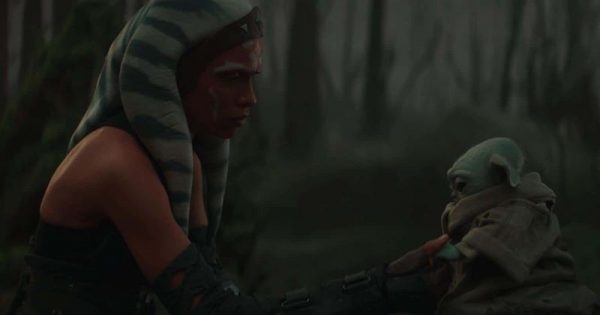 Along the way we also got some major answers relating to Grogu, who we can at last stop referring to ‘The Child’ (though it’s very likely ‘Baby Yoda’ won’t go away anytime soon). ‘The Jedi’ dealt nicely with the character moments between Din Djarin and Grogu as it established the father/son-like connection they share. It showed how, despite the age, language and cultural barrier between them, Din is the only one who truly understands Grogu as he knew just what would motivate him to use the Force and open up a little more. Some of the answers we received regarding Grogu’s past were also good, yet raised further questions like who his previous masters were and was it a Jedi who helped hide him after Order 66 or was Grogu perhaps in the hands of the Empire for previous experiments? Were those the dark memories Ahsoka referenced? Rather than provide concrete answers it only raised several more questions that are just as interesting.

The Mandalorian has often dealt with other film genres, most notably Western and heist, but for ‘The Jedi’ Filoni was heavily influenced by an Akira Kurosawa film as Ahsoka looked at times like a lone samurai. The final fight between Ahsoka and the Magistrate was the most blatant example of Kurosawa as the two fighters sized each other up and prepped for their duel with a complete lack of music as the Magistrate’s pond and the clash of their blades were the only soundtrack. The sequence was a very well choreographed and shot duel, as was Ahsoka’s run through the town taking out each of the Magistrate’s mercenaries one by one, even if it did lessen the impact of Din’s view that Ahsoka couldn’t take them all on which was the whole point of their team-up. Terminator‘s Michael Biehn also had a brief but nice role as the Magsitrate’s security chief, sharing a classic Western standoff of his own with Din.

‘The Jedi’ was an entertaining episode, but what should have been a grand live-action introduction for Ahsoka Tano instead feels rather lacklustre and out of character. The action is well done and the character work between Din and Grogu feels earned, but Ahsoka doesn’t feel quite right. If Dawson appears again hopefully her portrayal of Ahsoka will be better, but for now it is off the mark.