Christmas is a wonderful time for everyone and over the years its magic has permeated books, TV, films and even games. Although we don’t see Christmas related games as much as we once did (we get Christmas themed events instead) there was a time when developers would release games, either as a proper release or through magazine cover disks, specifically with a Christmas theme.  In this article we will look at five of my personal favourites. Before we begin however, there’s a couple of honourable mentions for games that got into the spirit of the season. The PC strategy game Stronghold had knights waging war in a medieval kingdom but load the game up on Christmas Day and a thoroughly English voice would say “Merry Christmas sire, your stronghold awaits”, and if that didn’t get you in the festive mood for some medieval archery practice on the Wolf then nothing would.

My second honourable mention is Cannon Soccer. This was on a coverdisk of Amiga Format back in 1994 and combined two of Sensible Software’s best loved titles.  In this brief two level game, players would once again take control of Cannon Fodder’s Jools and Stoo and lead them into battle against hordes of Sensible Soccer footballers.  Enjoyable hi-jinx for both lovers and haters of football. 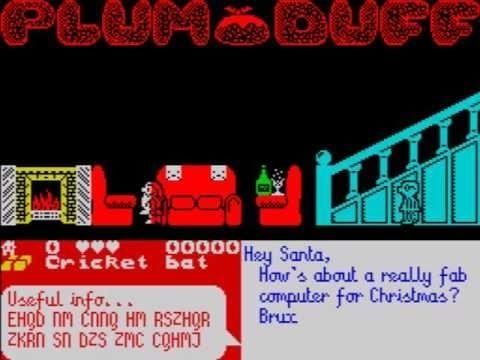 For our first classic Christmas game we travel back to 1985 with Bug Byte’s Plum Duff, where we take the role of the big man himself, Santa Clause.  In this festive fayre, Santa has had a bit too much sherry and is more merry than usual, unfortunately it has resulted in all the wrong presents going in the children’s stockings.  However, there’s still time to revisit all 32 houses with the wrong presents and make things right…. that is if you can avoid the man-eating house plants that wander around the houses.  Oh and waking the children is a huge no-no.

This isn’t a groundbreaking game by any stretch but it is a fun title and you certainly can’t deny it has a festive theme.  Scores extra points for having a sloshed Santa in the game’s story. 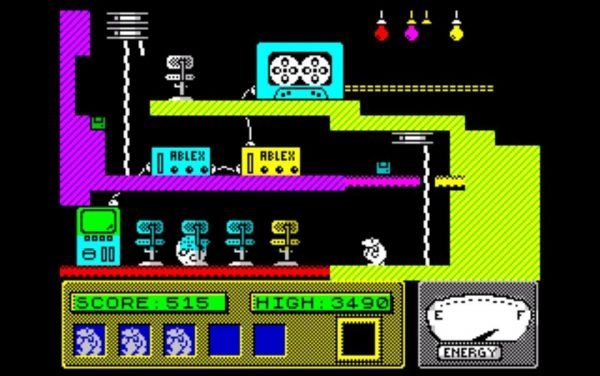 Next, we travel forward to 1987 for Gremlin’s Moley Christmas, a game exclusive to Spectrum magazine Your Sinclair and appearing in its bumper double sized December issue.  Monty Mole was a familiar face to Spectrum owners and this title was his 5th outing, having previously traveled Europe in Auf Wiedersehen Monty (which actually predicted a European single currency nearly a decade before it happened in real life).

In this short but enjoyable romp, Monty goes a bit meta as players must guide our friend around 6 screens ranging from developer Gremlin’s office to the Your Sinclair office to find a number of items that will help get the Christmas game (Moley Christmas) onto the Yuletide copies of Your Sinclair and into the cassette decks of the magazine’s readers.  In wonderful ’80s platform fashion, there’s a variety of enemies to avoid, things to jump on, ropes to climb and items to collect. 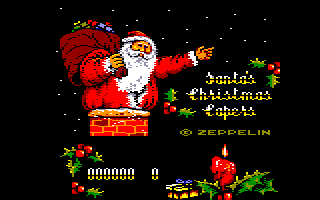 Third title on our list is Santa’s Christmas Capers and this is an odd game mainly because developer Zeppelin couldn’t decide what genre they wanted it to be between the versions on 8bit computers, DOS PC or the 16 bit Amiga.  On the trusty old Spectrum, Amstrad and C64 it was a side scrolling shoot-em up where Santa would take to his sleigh to shoot a variety of  bizarre enemies, including trains, sweets and plungers which flew across the screen at such speeds it was near impossible to survive. The Amiga and DOS versions of the game were a side scrolling platformer that would have a sleigh-less Santa jump over rooftops freezing enemies and collecting little presents.  This version was a lot more enjoyable to play but still isn’t the ultimate game to play at this time of year. 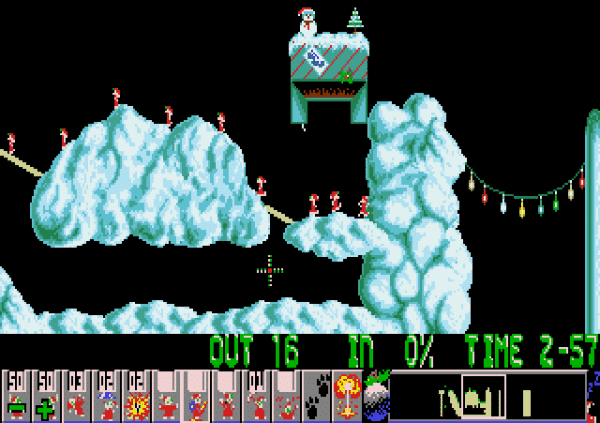 Puzzle fans weren’t left out between the Christmas’ of ’91 and ’94 thanks to DMA Designs and Christmas Lemmings (or Holiday Lemmings as it was called for our American cousins).  This popular series of Christmas Lemmings titles began in 1991 as a demo featuring just two seasonal themed levels added to two levels promoting Oh No! More Lemmings!  In 1992 another demo was released featuring four themed levels with seasonal music in the typical Lemmings style and our adorable green haired suicidal creatures all wore Santa outfits. Both 1993 and ’94 saw a full game released each consisting of 32 levels, Christmas music and all the festive decorations you could hope for.  Watching 50 Santa clad lemmings scream “oh no!” as they exploded was still as enjoyable as in all the other games. 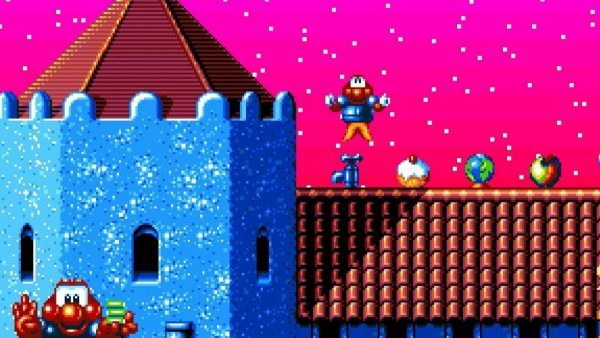 Finally, my personal favourite of seasonal games is the one and only James Pond II: Codename Robocod.  I’ll admit, it doesn’t sound very Christmassy but if it wasn’t for this little fish there would be no Christmas.

The evil Dr. Maybe from the original James Pond game survived and fled to the North Pole where he took over Santa’s workshops and held all the workers hostage and it was up to James Pond to head in there, rescue them and get back all the stolen toys so the fat man in red can deliver them in time.  Because this mission was much more dangerous James was given a robotic suit and codenamed ‘Robocod’ (no prizes for guessing which film that idea was based on) allowing him to reach much higher platforms than usual.  Should Robocod succeed, Santa comes and both he and James fly off on his magic sleigh to deliver presents.  A happy ending and a Christmas story we can all learn from….. don’t go holding Santa’s workers hostage.

As an aside, the UK release of James Pond II: Codename Robocod frequently advertised the UK chocolate biscuit snack Penguin, with an advert opening, pictures of the biscuit wrapper adorning the Christmas themed environments, and possibly explaining why Santa’s helpers were penguins in most versions of the game.

So there we have it, Christmas wrapped up in five wonderful games that you may or may not have played.  If you look around the old interweb there are sites where you can play some of these classic titles, so have a look and enjoy.