Ricky Church reviews the season five finale of The Expanse…

The end of The Expanse‘s fifth season has come with ‘Nemesis Games’ as Holden, Alex and Bobbie launch a rescue mission for Naomi while everyone else in the system prepares for war. The finale was tense and emotional with considerably raised stakes as the crew of the Roci was seemingly in a no win scenario, one that couldn’t succeed without a high cost. It was a near-perfect ending to the season that closed off storylines quite well while setting up the final season in very interesting and exciting ways.

The majority of the finale dealt with Naomi’s rescue and the impending danger both the Rocinante and Razorback were in as they raced into Marco’s trap. It was fairly suspenseful seeing Holden and Bull suit up for battle, knowing there was no way the Roci could take on five ships and survive, but Holden was resigned to simply buying enough time for Alex and Bobbie to save Naomi. It felt quite earned for Holden to sacrifice himself this way, even with Bull’s slight indignation at going out like this but even he was ready to take out as much of Marco’s Free Navy as he could before the end. Steven Strait and José Zúñiga delivered nice performances together as they each balanced out Holden’s serious determination and Bull’s no nonsense attitude with his levity. On the opposite side of the battle, Drummer’s situation was also tense as she finally took a stand against Marco’s lieutenant Karal, officially denouncing the Free Navy while costing her several of her crew and ‘family’ members. Both Holden and Drummer’s stories combined into a very exciting battle between the ships.

As far as performances for this season go, Dominique Tipper has stolen the show with the new layers she added to Naomi’s character and displaying her strength in doing whatever it took to save her found family. The strongest sequence of the episode came from her as Naomi once again dived into the vastness of space (this time with a suit at least) to try and alert Alex and Bobbie to the explosive trap Marco set. It was a scene full of suspense as Naomi used hand signals relaying the danger while running extremely low on oxygen. The way her rescue was shot made it quite an exhilarating scene. Whereas it could have shown an exciting rescue from Alex and Bobbie’s perspective, the choice to instead focus solely on Naomi’s face as she spun around, lost air and was on the verge of passing out or dying put a lot more emotion into the scene. When all you could hear was the muffled sounds of Bobbie getting her and hooking Naomi up to an oxygen supply, you could feel the same amount of relief Naomi felt due in large part to Tipper’s performance. 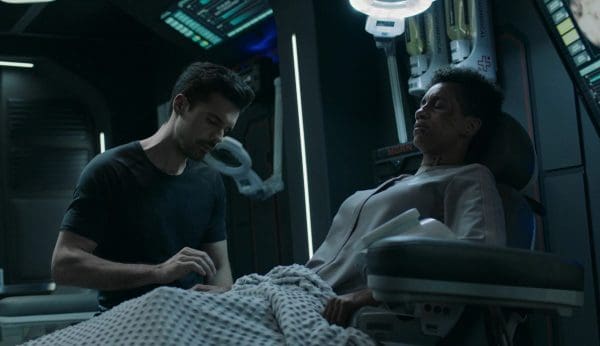 The rescue also leads us to the elephant in the room of Alex’s death due to suffering a stroke from all the high-g maneuvers he utilized to rescue Naomi. For those who may not know, Alex’s actor Cas Anvar came under fire last summer over allegations of sexual misconduct and assault, forcing The Expanse to let him go for next year’s sixth and final season. Alex’s passing felt a little sudden and awkward due to the last minute nature of Anvar’s dismissal, but the series handled his death in the best way they could while also building his death up by reminding viewers of the dangers of performing so many intense high-g maneuvers and juicing up so much. The fifth season has already felt the heaviest with the amount of losses the heroes have been dealt, but Alex’s death provides a cost the crew of the Roci haven’t felt in a long time. As Naomi’s message to Holden emphasized, the two of them, Amos and Alex had become a family to the point where they were prepared to do anything for each other. Alex would have sacrificed himself for Naomi and while the behind the scenes circumstances is definitely concerning, Alex’s character and exit was handled with care.

All season long the core cast has been split up, but they finally reunited in the last half of the finale where this season’s themes on family were spelt out in clear manner as the crew remembered Alex, welcomed Clarissa in one of Amos’ most humourous moment and Avasarala’s speech about unity. The happy moments didn’t last long forever though as Avasarala and Holden received news of Marco’s attack at the Ring and the rogue Martians helping him take control of it. It again raised his villain status and posed some questions for next season, such as how he will handle his new position of power and what side Filip will ultimately end up on as he seems once again firmly on his father’s side. Of course, though, there is the larger spectre of the protomolecule which Holden has been warning about, a fact which became a stark reminder with the brief look at whatever the protomolecule was building on the other side of the gate as well as the Martian ship getting disintegrated by whatever force destroyed the creators of the protomolecule. The multiple storylines the series has played with have blended together pretty well this season and those final moments certainly introduced a lot of intriguing new possibilities for what all the characters may face in the final season.

‘Nemesis Games’ was a great conclusion to the season with powerful performances from its cast, particularly Dominique Tipper, and a strong focus on the theme of family. The action, tension and emotion were all built up well and solidly delivered with plenty of questions left open for what the characters will do in the sixth and final season. It cements The Expanse as one of the best series we’ve had in our modern age of TV and streaming.