Tom Jolliffe takes a look back at Francis Ford Coppola’s adaption of Bram Stoker’s Dracula, which celebrates its 30th anniversary this year… The early 90’s. One of the greats of cinema, Francis Ford Coppola had seen his star fall from its apex in the 70’s, after some indulgent experimentation in the 80’s. Still considered one of the best in the business, despite never quite recapturing close to the magic of the Godfather 1 and 2, Apocalypse Now etc, he still had the clout to have carte blanche by the time he decided to do an adaptation of Bram Stoker’s classic novel Dracula.

Throw in plenty of artistic license and load the film with a cast of actors hitting a height of popularity. Keanu Reeves plays Jonathan Harker, donning, allegedly, supposedly, I guess, a British accent. Reeves riding high from playing Ted Theodore Logan and surfing with Patrick Swayze and was a superstar. Winona Ryder as our leading lady, hot off her breakout successes with Tim Burton and Heathers etc. Anthony Hopkins steps away from his restraints as Hannibal Lecter to play Van Helsing. Who plays Dracula? Not quite in the apex of his fame, though this film would play a part in his transition from Brit actor of high esteem to Hollywood regular, is Gary Oldman. Likewise throw in Tom Waits, Richard E. Grant, Monica Bellucci and Cary Elwes. It’s all-star. 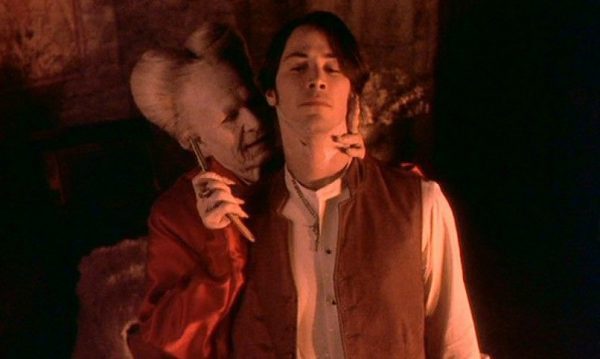 The film was released, greeted, like much of Coppola’s post 70’s work, with a mixture of acclaim for his quite obvious talents, or disappointment for the fact he hadn’t delivered something worthy of masterpiece status. In fact many thought that his version of Dracula was ludicrous. A campy, over-stylised bastardisation of classic literary fiction. Perhaps some may glamorise just how good the original book was, more memorable for its story line and iconic moments than its literary prowess. There’s a certain dark humour in places, and campiness that some may not have felt was intentional, but it certainly feels intentional. There’s a mismatch of cinematic reference from iconic classic horror era depictions of this character, to German expressionism and even Japanese cinema (spot some reference to Kwaidan among others). One thing that really benefits this version of Dracula is how unashamedly indulgent it is. Coppola scratches every creative itch he wants, because being arguably the biggest director around at the time, he was afforded the freedom to do so. That included overruling the studio on the subject of visual FX, with Coppola insisting he wanted to use classic practical techniques rather than more modern techniques available, going so far as hiring his son Roman to oversee them. If there is a visual flourish to be had in a scene, Coppola takes the opportunity to do so. It looks glorious, making full use of expressionist lighting, fog, wind and all manner of atmospherics. There is absolutely no restraint, but in what is essentially a creature feature, it works and there’s a certain artistic quality, a mark of an auteur that you wouldn’t always get from other similar films. Likewise, with Coppola in full flow, he allows his two most theatrical actors license to chew as much scenery as possible. As Van Helsing, Hopkins relishes the role. Van Helsing isn’t the most social adept of characters here, with a routine bluntness in what needs to be done, even when the requirement is gruesome. However, Gary Oldman relishes his villainy here with complete and utter immersion. He’s fantastic, making Dracula in equal measure campy, intense, tortured and complex. It’s a really memorable depiction of an iconic character who has had many cinematic guises. Oldman, may actually deliver the most layered and interesting performance. As cinephiles well know from watching films like Leon, when Oldman disappears into a villain, he seeks to make even the most heinous of characters inherently magnetic. 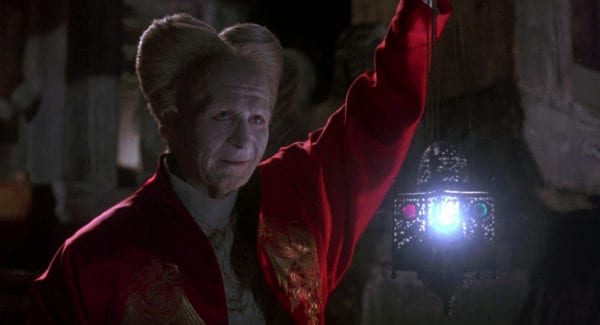 Ultimately, Coppola’s overblown Gothic horror is loaded with stunning imagery, memorable moments and a great magnetic energy coming from Hopkins and Oldman as this particular story’s most interesting characters. Ultimately too, it was Coppola’s last ‘grand’ film and remains his last great work. It’s a great example of a director fully utilising all his power. The mixed response was offset by big box office numbers, but perhaps Coppola had ran himself empty. His following film Jack was a far simpler affair and unfortunately misfiring, whilst The Rainmaker would make a solid if unspectacular final ‘major’ picture.