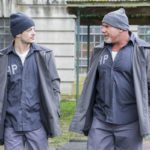 Following on from yesterday’s trailer [watch it here], a batch of promo images have arrived online for the eleventh episode of The Flash season 4, ‘The Elongated Knight Rises’, featuring a guest appearance from soon-to-be-WWE Hall of Famer Bill Goldberg. Check them out here… SEE ALSO: The Flash Season 4 Episode 10 Review – ‘The Trial […]

WCW and WWE legend Bill Goldberg is set to make a guest appearance on The CW’s DC superhero series The Flash, where he is set for a two-episode role. Just saw this on @instagram @World_Of_Flash_ @Goldberg is this true if so that is so awesome first @EdgeRatedR guest appeared on #TheFlash then it was @CodyRhodes […]

Ahead of its VOD and DVD release this March, a trailer has arrived online for the new action thriller Check Point, which sees WWE star Bill Goldberg starring alongside Kenny Johnson (The Shield), William Forsythe (Boardwalk Empire), Fred ‘The Hammer’ Williamson (From Dusk Till Dawn) and the late Ricky Harris (Everybody Hates Chris) in his […]

Former WCW and WWE star Bill Goldberg has signed on to executive produce and star in a new action thriller entitled Bauer, which is being directed by Richard Gabai (Justice, Call of the Wild). Bauer follows a veteran soldier (Goldberg) who is recruited to head a new black ops organization for the government. However, first […]