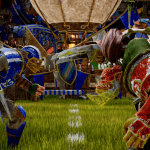 NACON and Cyanide Studio have announced they will be releasing Blood Bowl 3 in early 2021 on Xbox One, Playstation 4, Nintendo Switch and next gen’ consoles.  This new brutal and bloody fantasy sports game will be based on the new edition of the board game that Games Workshop will be releasing later this year […]