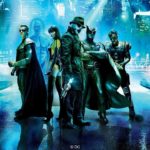 Ricky Church on HBO’s Watchmen series… It goes without saying that Watchmen is one of the most celebrated and revered graphic novels ever made. It is constantly cited as a favourite among comic book readers and usually listed as one of the greatest ever written from numerous sources. Zack Snyder directed a feature film in […]

Little has been said regarding the upcoming Watchmen TV series for HBO from Damon Linelof. We still don’t know whether its a reimagining of the graphic novel series, a prequel, sequel or some other form of spin-off. However, as the project ramps up production and is reportedly beginning its shoot in March, anticipation for the series may […]