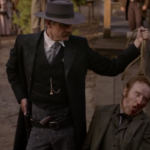 With a little over a month to go until the premiere of Deadwood: The Movie, HBO has released a new trailer for the long-awaited revival which you can watch here… https://www.youtube.com/watch?v=s0WrXmhvXTA Former rivalries are reignited, alliances are tested and old wounds are reopened, as all are left to navigate the inevitable changes that modernity and […] 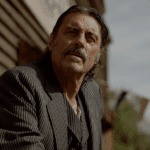 HBO has debuted the first teaser trailer for its long-awaited movie revival of the Western drama series Deadwood along with a premiere date reveal of May 31st; watch it here… Former rivalries are reignited, alliances are tested and old wounds are reopened, as all are left to navigate the inevitable changes that modernity and time […] The long awaited Deadwood movie will soon be upon us, with HBO recently confirming a spring premiere date for the revival of the Western drama series, and during an interview at the Television Critics Association winter press tour, actor Ian McShane (Al Swearengen) has shared a few words on the film and its story. “Deadwood […] Deadwood fans, rejoice! The long-awaited reunion is almost upon us, with Deadline revealing that HBO has set a spring 2019 for the Deadwood movie, which will make it eligible for contention in the 2019 Primetime Emmy Awards. Creator David Milch has scripted the movie, with Daniel Minahan (Game of Thrones) directing and Ian McShane (Al […]

After years of rumours and speculation, David Milch’s Deadwood movie is finally happening, and Entertainment Weekly has the images to prove it! Here’s our very first glimpse at the revival, which feature Ian McShane’s Al Swearengen and Timothy Olyphant’s Seth Bullock… SEE ALSO: Deadwood star comments on “gut wrenching” screenplay for revival movie The indelible characters […] Earl Brown, one of the stars of Deadwood, has shared his reaction to what he describes as a “gut wrenching” script for the revival movie. The Wire. The Sopranos. Deadwood. These are a few of the shows that marked the onset of the golden age of television and all three remain incredibly well regarded to […]

Almost a year to do the day that it was first reported that HBO was moving ahead with a Deadwood revival, we now have official from HBO president Casey Bloys that the movie will begin production in October. The Deadwood movie has been written by creator David Milch, and will be directed by Game of […]

Kim Dickens, who starred in HBO’s Deadwood, says the movie version is set to start filming this autumn. Deadwood is one of the most highly regarded TV shows in history but was unfortunately cancelled in 2006 after just three seasons, leaving a lot left unsaid. Talk of a movie continuation has been going on for […]