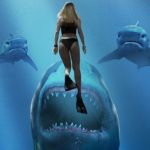 IGN has revealed the first trailer for Deep Blue Sea 2, the upcoming sequel to Renny Harlin’s cult 1999 thriller. The film is directed by Darin Scott and features a cast that includes Michael Beach, Danielle Savre, Rob Mayes, Darron Meyer, Nathan Lynn and Kim Syster; check it out here… As per IGN: “In Deep […]

No doubt spurred on by the success of its Sharknado series, Syfy is dipping its toes back into the sharksploitation genre, with Moviehole reporting that the network has kicked off production on a made-for-TV sequel to 1998’s Deep Blue Sea. The site reports that the project is currently shooting in Cape Town, with Darin Scott (House […]