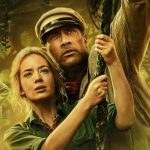 As the film crosses $100 million dollars at the domestic box office this  past weekend, Jungle Cruise is getting a sequel. Yes, Disney will go down the river again in this film based on one of their most popular rides as Jungle Cruise 2 is officially in the works, says The Hollywood Reporter. Returning for […]