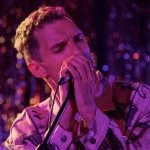 Netflix has released a trailer, poster and images for director Eddie Sternberg’s comedy drama I Used to Be Famous which stars Ed Skrein, a former popstar dreaming of making a comeback, who forms an unexpected friendship with the talented autistic drummer Stevie (Leo Long) after an impromptu jam with the young musician.   Vince used […]