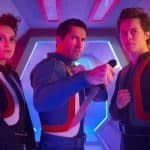 Well Go USA has released a poster and trailer for the sci-fi action comedy Max Cloud which follows a teenager who finds herself trapped in a notorious intergalactic prison inside her favourite video game after accidently opening a portal into it, Jumanji-style. Directed by Martin Owen, the film features a cast that includes Scott Adkins, […]