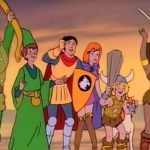 Robert Rodriguez has been tapped to direct the live-action version of Ralph Bakshi’s Fire And Ice with hopes of a franchise. This marks a reunion of sorts for Rodriguez and Sony as El Mariachi (the film that launched his career) was picked up by Columbia Pictures, a division of the entertainment company, back in 1992. […]