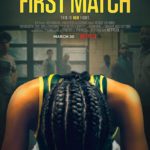 Ahead of its premiere at South by South West and arrival on Netflix later this month, a poster and trailer have been released for writer-director Olivia Newman’s upcoming drama First Match. Based on Newman’s 2010 short of the same name, the film features a cast that includes Elvire Emanuelle, Yahya Abdul-Mateen II, Colman Domingo, Jharrel Jerome, […]