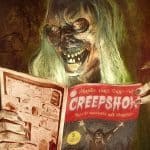 DreadXP, AMC Networks and Cartel Entertainment have announced that the Creep is coming to consoles with a video game based upon Shudder’s hit television series Creepshow, itself inspired by the classic 1982 George A. Romero and Stephen King anthology horror movie. Retaining the anthology format with multiple self-contained stories crossing gameplay genres and tone, the […] 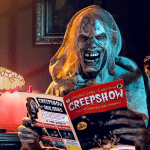 Although the second season of the Shudder exclusive horror anthology series Creepshow has only recently started production after an indefinite delay due to the ongoing global health crisis, the streaming service has announced a brand new Creepshow animated special will debut on October 26th – just in time for the Halloween season. The animated special will feature […] Back in March, Shudder announced production on the second season of their hit original horror anthology series Creepshow was halted indefinitely due to the ongoing global health crisis. Now, the streaming service and showrunner Greg Nicotero have revealed filming is officially underway on the six-episode second season which will premiere exclusively on Shudder in 2021. “I’ve never […]

Although the second season of Shudder’s hit original horror anthology series Creepshow has halted production due to the ongoing global health crisis, showrunner Greg Nicotero has offered an update on the scripts including a tease of the latest writing team behind the new episodes. In a recent interview with Bloody Disgusting’s Boo Crew Podcast, Nicotero teased […] 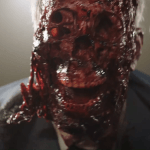 With less than a week to go until Creepshow premieres on Shudder, a new trailer has arrived online for Greg Nicotero’s (The Walking Dead) upcoming horror anthology series which is based on George A. Romero and Stephen King’s 1982 movie of the same name; check it out here… SEE ALSO: Creepshow TV series gets a new […] Greg Nicotero, a producer for The Walking Dead, has explained why Rick left the show in the way he did. SPOILERS FOLLOW… Rick Grimes, and the actor that played him, Andrew Lincoln, has finally left AMC’s The Walking Dead. His final episode played this week and didn’t end with the character’s death, as many had […] EJ Moreno chats with Greg Nicotero… Greg Nicotero is The Walking Dead’s executive producer, director, and special-FX makeup designer. After a stint on a number of movies across the globe (Inglorious Basterds, The Book Of Eli, Predators, and Transformers), Nicotero found himself in 2010 designing zombies for The Walking Dead. Within months he’d become the producing […] As Todd McFarlane continues with pre-production on his big screen reboot of Spawn, the creator has been chatting to Comic Book about redesigning the comic book character’s classic look for his second feature film appearance. “Does Spawn have a dark mask and his body dark and then does he have a cape in the comic […]