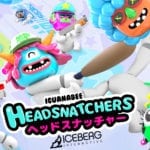 Those of you looking forward to today’s release of Iceberg Interactive’s multiplayer party game, Headsnatchers, will be disappointed to hear that the game has been delayed and won’t be available until 24th July.  The decision for this delay was made at the last minute as the developers felt there could be improvements made to provide a better […]

Iceberg Interactive’s lively multiplayer party game, Headsnatchers, will arrive on Steam Early Access tomorrow but that hasn’t stopped them releasing a gameplay trailer showcasing the game’s Roulette Mode. You can see the trailer below… Headsnatchers will see players compete in a number of different mini games by snatching each others cartoon heads. Containing a variety of game […]

Iceberg Interactive and developer IguanaBee have announced that their lively multiplayer party game, Headsnatchers, will arrive on Steam Early Access on 10th July.  With variety of game modes inspired by some of the craziest Japanese TV shows, Headsnatchers will see players compete in minigames by snatching each others cartoon heads.  The game’s Early Access trailer below showcases what […]