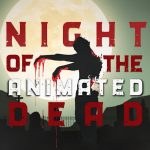 We’ll soon be able to add another version of Night of the Living Dead to the ever-growing list of remakes of George A. Romero’s classic 1968 zombie horror, with Warner Bros. Home Entertainment announcing the upcoming release of Night of the Animated Dead. The new film is being directed by Jason Axinn (To Your Last […]