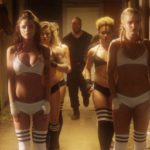 A new poster and trailer have been released for the action thriller Kiss Kiss. Written and directed by Dallas King, the film stars Natascha Hopkins, Nathalia Castellon, Tamra Dae, and Janey B as four strip club dancers who are forced to fight for their lives after being taken captive by a special forces veteran –  […]