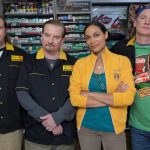 After teasing the release for the past week with several posters, Lionsgate has now unveiled the first trailer for Clerks III, the latest chapter of Kevin Smith’s View Askewniverse, which takes things right back to the beginning as Dante and Randal set about making a black and white movie in the Quick Stop convenience store; […] 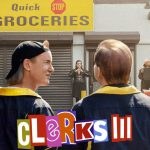 With the first trailer set to release this Wednesday, Lionsgate has released a new teaser poster for Kevin Smith’s latest film Clerks III, which sees Dante and Randal preparing for another day at the Quick Stop; check it out here… In multiple cases of art imitating life, Clerks III will see Randal and Dante looking […] 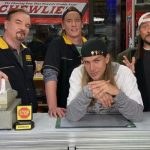 After returning to the View Askewniverse with Jay and Silent Bob Reboot, Kevin Smith is now bringing things full circle this year as we revisit the Quick Stop in Leonardo, New Jersey for Clerks III.  Brian O’Halloran and Jeff Anderson are back on shift as Dante Hicks and Randal Graves alongside Smith’s Silent Bob, Jason […] 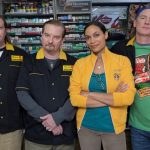 Kevin Smith has revealed a first look at Clerks III, which is currently in production, showcasing Trevor Fehrman, Brian O’Halloran, Rosario Dawson and Jeff Anderson as they reprise their roles from the 1994 cult classic and its 2006 sequel. Smith also revealed the plot around Clerks III as something both meta tongue-in-cheek and autobiographical. Smith suffered […]