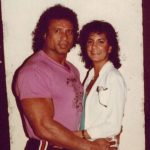 VICE TV has released a trailer for next week’s fourth episode of season two of its pro-wrestling documentary series Dark Side of the Ring, which will delve into the mysterious 1983 death of Nancy Argentino, the then-girlfriend of Jimmy ‘Superfly’ Snuka – a case which saw the wrestling legend arrested and indicted for murder some […]

In the build-up to WrestleMania 32, the Flickering Myth writers look back at previous installments of the ‘Showcase of the Immortals’… The Card: Tito Santana vs. The Executioner Special Delivery Jones vs. King Kong Bundy w/Jimmy Hart Ricky Steamboat vs. Matt Borne David Sammartino w/Bruno Sammartino vs. Brutus Beefcake w/Johnny Valiant (No Contest) IC TITLE MATCH: Greg […]