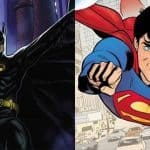 1978’s Superman: The Movie and 1989’s Batman are historic and groundbreaking films in the superhero genre, helping set the stage for how these larger than life characters and their fight against crime can be portrayed on screen, particularly with the performances of Christopher Reeve as Superman and Michael Keaton as Batman. Now fans can get ready to return to the […]

Marvel’s Howard the Duck all but disappeared after his eponymous 1986 film failed miserably and entered the pantheon of terrible comic book movies, but the character is primed to make a triumphant return, thanks in no small part to a funny post-credits scene in this year’s runaway hit, Guardians of the Galaxy.  While he may not […]