Chris Connor reviews the ninth episode of Star Wars: Andor… Andor’s ninth episode ranks among the seasons’ best to date, capturing the grim reality of life under Imperial rule and a real sense of despair pervading our characters’ fates and the desperation that forces them to act. Especially bleak are the sequences within the prison […] Hot Toys has unveiled its new sixth scale Luke Skywalker (Bespin) deluxe figure which is inspired by the likeness of Mark Hamill in Star Wars: Episode V – The Empire Strikes Back. The collectible is available to pre-order now from Sideshow, priced at $345; check it out here… Sideshow and Hot Toys are delighted to […] Iron Studios has unveiled its 1:10 scale Luke Skywalker Battle Diorama Series statue which is inspired by the appearance of the Jedi Master in the season 2 finale of the Disney+ series The Mandalorian. The Star Wars collectible is available to pre-order now from Sideshow, priced at $160; check it out here…   Inspired by […]

It’s a commonly known fact that actor Sebastian Stan bears a scary resemblance to a young Mark Hamill. So much so, that Mark Hamill has given the actor his blessing to play a young Luke, and the two frequently poke fun at the resemblance on social media. Now, a Luke Skywalker spinoff could work for […] 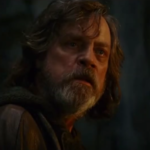 It looks like Mark Hamill, and Star Wars: The Last Jedi director Rian Johnson had very different views for Luke Skywalker’s arc in the film. Speaking to Screen Rant at a Last Jedi press junket, the Star Wars icon gave a firm “No” when asked if his vision for Luke’s role in the film matched […]

With all of the talk of Luke Skywalker being a bad guy in Star Wars: The Force Awakens [including Luke Owen’s theory that he’s actually Kylo Ren], The AV Club have unearthed this tremendously coincidental video. Filmed ten years ago, Dinner for Five on IFC featured directors and actors sitting around and talking about their projects. In […]

Luke Owen with a wild fan theory for Star Wars: The Force Awakens… “There has been an awakening, have you felt it?” Kylo Ren is the new big baddy of the Star Wars Universe. The leader of the First Order, he’s a man who is obsessed with the work of Darth Vader and will use […]