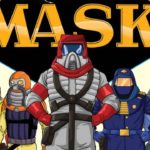 Remember M.A.S.K.? The Mobile Armored Strike Kommand force action figures and subsequent cartoon show from the ’80s? Well, Paramount and Hasbro hope that you do, because they’re still moving forward with their big-screen adaptation, to which Straight Outta Compton‘s F. Gary Gray has been attached since 2018. How do we know? Well, according to THR, […] 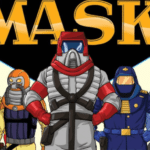 Back in January it was reported that Paramount Pictures and Hasbro were unlikely to be moving forward with their previously announced ROM and M.A.S.K. movies, which had initially been announced as part of a planned Hasbro Cinematic Universe. Since then however, we’ve heard that Ready Player One’s Zak Penn has been hired to pen a […]

Back in April 2016, Paramount Pictures and Hasbro announced plans to launch a cinematic universe based around Hasbro’s classic toy properties G.I. Joe, Micronauts, Visionaries, ROM: Spaceknight and M.A.S.K., tapping Akiva Goldsman to oversee a writers room that included a host of in-demand screenwriters, including John Francis Daley and Jonathan Goldstein (Spider-Man: Homecoming). Since then, the studio has set release […] 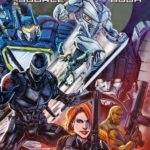 If you feel a little out of the loop with IDW’s shared Hasbro universe then the publisher has just the thing for you this week with the release of Hasbro Heroes Sourcebook, which will get you up to speed with the heroes and villains of Transformers, G.I. Joe, Rom, M.A.S.K., Micronauts and Action Man post-Revolution. […] 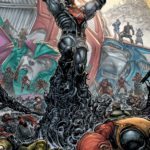 IDW’s Hasbro crossover event First Strike continues this Wednesday with the release of issue #5; check it out here… WPrison Break! After a daring escape, Optimus Prime, the Autobots, Scarlett, G.I. Joe and M.A.S.K. must venture into the heart of Cybertron to stop Cobra’s devastating weapon that will kill every Transformer on the planet! First […] 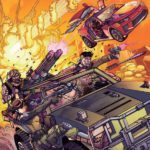 This August, General Joe Colton, the original G.I. Joe, will take the fight directly to the Transformers home world of Cybertron in the Hasbro Comic Book Event of 2017, First Strike, a six-part bi-weekly series from writers Mairghread Scott (Transformers) and David A. Rodriguez (Skylanders), with art by Max Dunbar (Dungeons & Dragons), and colors […]

Anghus Houvouras reviews Revolution #2… ROM-A MURDERER?! That’s what OPTIMUS PRIME and the TRANSFORMERS think-and right or wrong, there’s only one outcome: all-out war! Meanwhile, G.I. JOE turns to the one person who can save the world from ultimate destruction-MILES MAYHEM! SEE ALSO: Check out a preview of Revolution #2 here For my money, I […]

Anghus Houvouras reviews M.A.S.K.: Revolution #1 & Micronauts: Revolution #1… IDW’S Revolution crossover event started with a bang last week bringing a half dozen of everyone’s favorite action figures out of the toybox and into a major action packed conflict. The event is being used as a launch pad for the Moblie Armor Strike Kommand […]

Anghus Houvouras reviews Revolution #1… THE REVOLUTION BEGINS! Explosions rip across the Earth—and all signs of blame point to OPTIMUS PRIME and the TRANSFORMERS! G.I. JOE refuses to go quietly—and they assemble heroes big enough to stop the invaders! ACTION MAN and M.A.S.K. fight for humanity—but where do ROM and the MICRONAUTS stand? Celebrating more […]