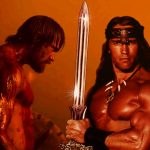 Tom Jolliffe looks at the similarities between The Northman and Conan the Barbarian. Spoilers follow… Robert Eggers has released his long awaited third movie. After success and masses of acclaim for his small scale masterworks The Witch and The Lighthouse, Eggers has gone large scale in his third outing. The Northman is a big budget […]