Having saved the show follow its cancellation at NBC, Netflix has now unveiled a trailer and promotional images for the first half of the fourth and final season of Manifest ahead of its premiere this November. Check them out here…   Two years after the brutal murder of Grace turned their lives upside down, the […] After NBC cancelled Manifest last year, Netflix picked it up for a fourth and final season after a campaign from the series’ fans. Now Netflix has released a teaser trailer for Part One of the final season with a premiere date of November 4th – a significant date for Manifest as it is the date when […] After originally being cancelled by NBC, series star J.R. Ramirez has taken to Instagram to announce that the fourth and final season of Manifest has entered production at Netflix. The final season will consist of twenty episodes in order to wrap up creator Jeff Rake’s original vision.   View this post on Instagram   A post shared […]

With enough fan support, a series can be saved these days. Just use Manifest as an example. Ten weeks after the series was canceled by NBC, Netflix is saving it and giving fans a final season. Manifest, a sci-fi drama, was axed a few weeks back and saw immense fan support. Even people like author […] Tai Freligh chats with Manifest star Curtiss Cook… An actor who began his career struggling on Broadway as a single father of three children, Curtiss Cook is now best known for projects including Arbitrage, The Interpreter and Shutter Island, along with roles in series such as Netflix’s House of Cards, Luke Cage and Narcos. Curtiss can […] 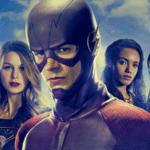