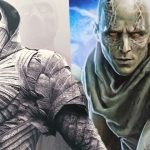 Earlier this month, Moon Knight head writer Jeremy Slater revealed that we almost got cameos from “three or four” of the Eternals in Marvel Studios’ most recent Disney+ show, and it seems that wasn’t the only crossover on the cards during development as plans were also afoot for the series to tie in to the […]