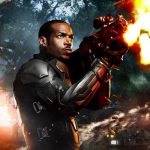 As revealed by The Hollywood Reporter, Marlon Wayans is set to team with Fast & Furious producer Neal H. Moritz for Ride or Die, a romantic buddy-cop action-comedy which is being described as “Bad Boys with romance” or “When Harry Met Sally… with guns”. Scripted by Wayans and Rick Alvarez, the film will revolve around […]