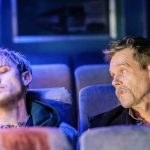 Saban Films has released a trailer for One Way, the upcoming action thriller which stars Colson Baker as Freddy, a wounded criminal on the run after stealing from the biggest mob boss in town and trying desperately to stay alive to get one last shot at redemption with his family. Directed by Andrew Baird, the […]