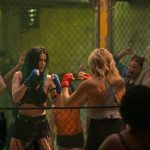 A trailer, poster and images have been released for director Paul Leyden’s upcoming action comedy Chick Fight which stars Malin Akerman as Anna, a woman down on her luck until she is introduced to an all-female fight club. Joining Akerman in the cast of Chick Fight are Bella Thorne, Alec Baldwin, Dulcé Sloan, Kevin Connolly, […]